Home News Politics You Will Have To Manufacture Your Country – Buhari’s Aide Replies Oyedepo...
NewsPolitics 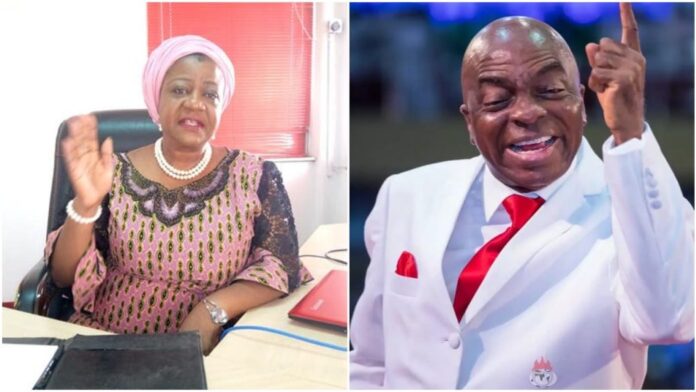 You Will Have To Manufacture Your Country, Buhari’s Aide Replies Oyedepo On CAMA

Bishop David Oyedepo had reacted against the application of the Company and Allied Matters Acts, CAMA, in churches.

He warned on Sunday that the church is directly connected to God and therefore does not operate under the rules of men.

Under the new CAMA law signed on August 7 by President Buhari, religious bodies (churches and mosques) as well as charity organisations, will be strictly regulated by the Registrar-General of Corporate Affairs Commission (CAC) and a supervising minister.

Reacting on her Twitter page, Onochie declared that Oyedepo will have to live by the laws in Nigeria or manufacture his own country.

Hope this is not true. If it is, Oyedepo will have to manufacture his own country and live by his own laws.

As long as he lives and operates within the entity called Nigeria, he will live by Nigerian rules and laws.

He will do as he’s told by the law. Enough of lawlessness.

The Minister of Information and Culture, Lai Mohammed, has reacted to the second report on the October 20 Lekki Tollgate shootings released by the...
Read more
Politics

N148 billion have been approved for the states of Bayelsa, Cross River, Ondo, Osun and Rivers as refund for road projects executed on behalf...
Read more
Politics

Nigeria is hit by the worst recession since 1987 According to gross domestic product numbers released by the National Bureau of Statistics on Saturday,...
Read more