Home News Politics You Need To Calm Down And See Buhari's Achievements - Adesina To...
NewsPolitics 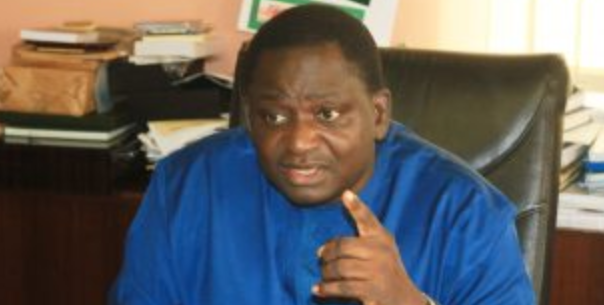 The Special Adviser to President Muhammadu Buhari on Media and Publicity, Femi Adesina, on Thursday advice those who turn blind eye to Buhari’s achievements.

He said that Nigerians will only see the achievements of the President if they “calm down”.

He made reference to a viral video of the little Oreofeoluwa Babalola pleading with his mother to calm down after she attempted to beat him for a wrongdoing.

Adesina said Nigerians need to calm down and stop being angry about the problems plaguing the nation.

But if the truth be told, that message from the boy is for the entire country. We need to calm down.

We are too uptight, nervy, edgy, We grumble, murmur too much, call the government a lot of names, try to demonize those serving the nation, when it could be “our last chance.

Last chance in the world” to really fix things.

If you listen to some people; angry youths, religious leaders, political analysts, newspaper columnists, news reviewers, so-called activists, then nothing positive is happening in the country.

It is all about insurgency, banditry, killings, joblessness, corruption, lack and deprivation. True? False!

Those things are there, as they are also in many countries of the world.

But they are not the only things happening in Nigeria. Only that we would not see the positive things, except we calmed down.

We would never enjoy the rainfall, if we expect rainstorm to carry away our rooftop at any moment. Calm down.

I’m just telling you to be ‘calming’ down.

Buhari Reacts To Obaseki's Victory. President Muhammadu Buhari has reacted to the victory of Governor Godwin Obaseki of Edo State at the...
Read more
Politics