You Are Morally, Ethically Unfit To Contest For President Again – Bamgbose To Atiku 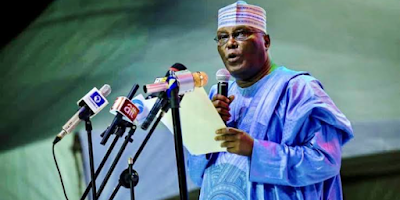 Following a hint by one of Atiku Abubarka’s sons, Adamu, who yesterday stated that his father will run for president again.

The National Coordinator, Concerned Advocates for Good Governance, CAGG, Olusegun Bamgbose, Esq., has said that even though former Vice President, Alhaji Atiku Abubakar, is constitutionally qualified to run in the 2023 presidential election, he is ethically and morally unfit and ineligible to contest.

He said in a statement;

Constitutionally, the former Vice President is qualified to contest, but ethically and morally, he is unfit and ineligible to contest,” the senior lawyer, who has also indicated interest to run in the election.

The move by the former VP has shown he has no atom of regard and respect for the Southern part of Nigeria.

There is still a subsisting unwritten gentleman agreement, that power should, as a matter of political convenience, rotate between the North and the South.

In 2023, other things being equal, President Buhari would have spent 8 years as the President of the Federal Republic of Nigeria

Power, ordinarily should shift to the South. Atiku’s Presidential ambition come 2023 will constitute a flagrant breach of the gentleman agreement.

In essence, it’s morally and politically despicable for Atiku to still indicate interest in 2023 Presidential elections. It’s unjust and unpatriotic of him to insist on contesting again come 2023.

Where is his professed love for one Nigeria? Does he truly have regard for the youths of this country? Does he really consider the interest of the Southerners? His ambition will certainly jeopardize his political reputation.

It’s my humble view that it’s time for Atiku to call it a quit from politics. He should give room for others to come up. He should forget his Presidential ambition for the sake of justice, equity and fair play.

If truly he believes in one Nigeria, it’s time for him to throw in the towel and be a mentor or elder statesman. He should steer clear of Presidential elections and groom people to take over.

I sincerely commend Mallam Nasir El-Rufai categorical statement, that there is no justification for a Northerner to take over power, after Buhari’s eight years as President. This is honourable of him.

He believes that it’s just for the power to go back to the South. He further said earlier this year, ‘I think that every politician of honour should understand and abide by that consensus.’ He was referring to rotational Presidency.

He wonderfully capped it up by submitting it this way ‘I want to say that those of us from Northern Nigeria honour agreements. We do not violate unwritten political agreements, and I will be the last person to lead in violating that agreement.

This is a great statement that will be on the marble forever. This is very commendable. Atiku’s ambition will certainly violate the unwritten but sacrosanct agreement.

Atiku should, therefore, toe the line of El-Rufai, as a politician of Honour and repute. It’s time for him to tell Nigerians that his love for one Nigeria is genuine.