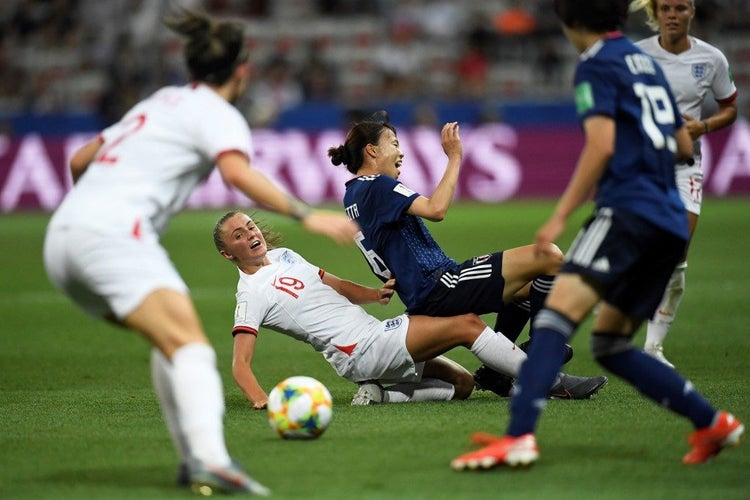 Ellen White scored twice as a much-changed England beat former champions Japan 2-0 in Nice on Wednesday to ensure that Phil Neville’s side progress to the last 16 of the women’s World Cup from first place in Group D.

Georgia Stanway released White to slot home in the 14th minute, and the same player then wrapped up the win six minutes from time, taking her tally of goals at the tournament so far to three. For England, the result allowed them to gain a measure of revenge for their heartbreaking 2-1 defeat against the same opponents in the semi-finals four years ago.

Both teams were already through to the knockout phase anyway, but there was certainly plenty to be gained by finishing first in the section given what is likely to come next.

Having arrived in France with genuine ambitions of winning the trophy, England will now head north to Valenciennes for a last-16 tie on Sunday against a third-placed side from another group.

However, they will not know until late on Thursday who they will be coming up against, with Cameroon, New Zealand, Chile and even Thailand all potential opponents.

The permutations are less complicated for Japan, but the Nadeshiko — World Cup winners in 2011 and runners-up in 2015 — will surely have a stiffer test in Rennes against either the Netherlands or Canada.

Asako Takakura’s youthful team finish the group phase with just one win, and another run to the final appears a long shot at this stage.

England, in contrast, progress with three wins out of three, despite Neville ringing the changes once again as his side returned to the Cote d’Azur after edging out Argentina in Le Havre.

There were eight changes to their line-up here, with only captain Steph Houghton, right-back Lucy Bronze and midfielder Jill Scott keeping their places. Demi Stokes and Toni Duggan made their first appearances of the tournament.

It was Japan who almost took an early lead from Kumi Yokoyama’s 35-yard free-kick which England goalkeeper Karen Bardsley tipped onto the woodwork and behind for a corner.

Del Potro suffers fresh injury scare in win at rain-affected Queen’s
Soon after, England were in front, the impressive Stanway playing a ball in behind for White to fire past the advancing Japanese goalkeeper, Ayaka Yamashita.

Scott, Stanway and Rachel Daly were all denied by Yamashita as Neville’s team pushed to extend their lead before half-time, and their physical superiority was such that they certainly deserved their advantage.

Duggan was also denied after the restart, but England eventually got their second goal from another clinical first-time finish by White, this time from a Karen Carney pass with six minutes remaining.

Substitute Yuika Sugasawa twice came close to scoring for Japan, either side of White’s second strike, but there was to be no consolation for them.