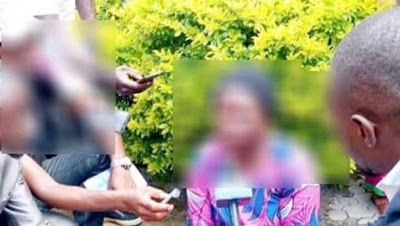 A woman made shocking revelations of how she use charms robbed on her private part to take men destinies.

Making this revelations, Mary Chiwe who is a native of Anambra state, said she uses charms to rob her private part before sleeping with men to steal their destiny.

According to her, she was always paid by rich men to use the charms on any man that wants to sleep with her and in return the destiny of such man will be transferred to the rich men.

Chiwe was applying the charms inside the toilet before she met her waterloo as the young man she is supposed to sleep with after coming out of the toilet caught her redhanded.

The young who caught her red handed reveal that he noticed Mary was taking too long inside the toilet and decided to go and peep to see what she was doing.

According to the young man;

I saw the lady holding a small bottle with a red cloth tie on it even though I didn’t see the content but I notice she was robing the content on her private part so I burst into the toilet and catch her when I started beating her up, the hotel management came out to intervene.

I explained everything and she tried escaping but it was too late. She later started confessing before newsmen arrived.

The lady, Mary Chiwe reportedly spoke with some newsmen and disclosed all the methods and style she uses in sleeping with men and how she uses the charms on each man she sleeps with.