Wife And Mother of British Husband, Children Who Drowned In Spain Blames Pool 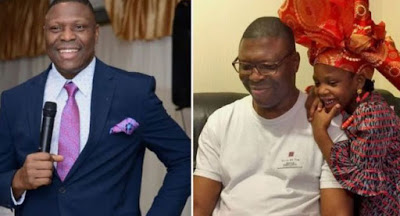 Pastor Gabriel Diya, 52, who died after reportedly getting into the water when he saw his nine-year-old daughter Comfort in distress.

Mr Diya’s Facebook account lists him as a pastor at Open Heavens London, a Christian religious group with origins in Nigeria, based in Charlton, south-east London.

While reacting to the incident, Wife of the deceased husband and children says she believes there was something wrong with the pool which led to the drowning of her loved ones.

ALSO READ: Man Narrates How His Wife Saved Their Daughter By Diving Into Well After Daughter Fell In

According to Mrs Olubunmi Diya, she believes something was wrong with the pool that must have made swimming difficult for her husband and their two children at that point in time.

Mrs Diya maintain that, her husband Gabriel Diya, 52, son Praise-Emmanuel, 16, and daughter Comfort, nine, all knew how to swim, a claim which goes contrary to what some media houses had reported.

In reaction to the incident, hotel operator CLC World Resorts and Hotels said inquiries had found “no concerns relating to the pool in question” and that the incident appeared to be a “tragic accident”.