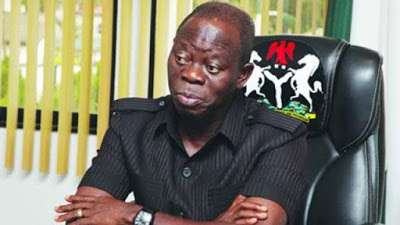 Following the sack of the governor-elect of Bayelsa State, David Lyon and his Deputy, Biobarakuma Degi-Eremieoyo, by the Supreme Court.

The duo were sacked by Justice Mary Odili, led panel of five-man justices, on the grounds of a forged certificate presented to the Independent National Electoral Commission, INEC, by the deputy governor-elect.

Comrade Adams Oshiomhole, the National Chairman of the All Progressives Congress, APC, has declared the candidate of the Peoples Democratic Party (PDP) Senator Douye Diri cannot be sworn in on Friday as Bayelsa Governor because he did not meet the requirements of the Supreme Court.

ALSO READ:  Enrol Your Child In Almajiri System And Go To Jail - El-Rufai To Parents

Speaking at an ongoing press conference, Oshiomhole declared that “Nobody will be sworn in on Friday as the new governor in Bayelsa state.”

According to him, the Supreme Court judgement did not order that the PDP governorship candidate should be sworn in.

In this case nobody apart from David Lyon meet desire spread as expressed by the Supreme Court.

The next candidate who happens to be a PDP candidate does not have one-quarter of the votes cast in that election.

54-year-old Woman Gives Birth To Triplets In First Pregnancy
ALSO READ:  Enrol Your Child In Almajiri System And Go To Jail - El-Rufai To Parents
A 54-Nigerian woman, Funmi Ajagbe has given birth to a...
Read more
General News