Why CAN President Calls For Immediate Removal Of Chief Justice 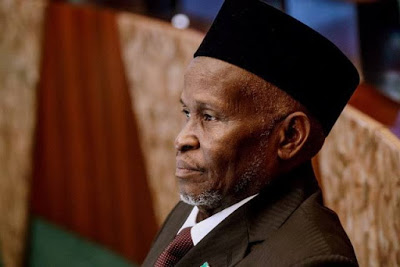 Following the Chief Justice’s call for constitutional amendment to allow the integration of Sharia law. Christian association of Nigeria (CAN) president, Rev Dr. Samson Ayokunle has called for the removal of the Chief Justice of Nigeria, CJN, Tanko Muhammed due to his alleged religious bias.

While reacting to the chief Justice’s call for constitutional amendment to allow for the integration of Sharia law, the CAN president calls for immediate sack of the Chief judge.

The CJN who was represented by Grand Khadi spoke at a two-day conference organized by the Centre for Islamic legal studies, CILS, ABU in collaboration with National Judicial Institute, NJI, Abuja.

The event was lebelled: “Documentation of Contracts in Islamic Law: Procedure, Sample Precedents and Practice”

The CAN president described the remark by the CJN as provocative and unacceptable.

Speaking through his Special Assistant on Media and Communications, Pastor Adebayo Oladeji, the CAN President said that it was eagerly awaiting the rebuttal of the CJN on “the unfortunate and unguarded utterances that can provoke a religious crisis in the country”.

Our attention has been drawn to the advocacy of the Chief Justice of Nigeria, Justice Ibrahim Tanko Muhammed for the amendment of the Constitution with a view to adding more Sharia contents.

We don’t believe that such a reckless and provocative statement could be made by the number one judicial officer in the country. How could the CJN say ‘We as Muslims have the numbers to amend the constitution’? It is not possible. It is either he was misquoted outright or quoted out of context.

Asking for constitutional amendment with a view to adding more to the Sharia contents is ill-timed, provocative and unacceptable. Was the Chief Justice of Nigeria put there deliberately for the promotion of Islamic matters or to be unbiased and fair judge for all irrespective of religion? It appears from this statement (if he made it) that he was put there for Islamisation agenda.

Those in government are warned not to use the cheap popularity or acceptance they seek to set two religious practitioners against each other.

This type of statement, if true, is enough for the President of the country to initiate the removal of this Chief Justice from office.

Expressing worry over the apparent silence by both the leadership of the presidency and the National Assembly on the CJN outburst.

Do we take it that what he said is the official position of this regime on inter-faith relations? Why has no one in leadership, either, the Executive or Legislative arm of government taken him up on it?

The Christian Association of Nigeria (CAN) is eagerly awaiting the rebuttal of the Chief Justice of Nigeria on the unfortunate and unguarded utterances that can provoke a religious crisis in the country.