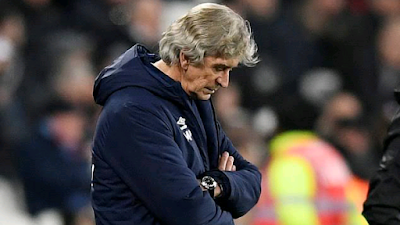 Pellegrini joined West Ham in May 2018 with the former Manchester City manager guiding the club to a 10th-placed finish in his first season in charge.

The 66-year old former Real Madrid and Manchester City boss have a run of just two wins in 14 games, including seven defeats in their last nine league matches, which saw his sack from club.

The worst of it, West Ham were also knocked out of the Carabao Cup after losing 4-0 to League One outfit Oxford United in September.

Joint-West Ham chairman David Sullivan confirmed the decision to part ways with Pellegrini on Saturday night, stressing it was important to get the club “back on track”.

It is with great disappointment that we’ve had to make this decision.
Manuel is a gentleman and it has been a real pleasure to work with someone of his calibre.

However, it has become clear that a change is required to get the club back on track in line with our ambitions this season. We felt it was necessary to act now in order to give the new manager as much time as possible to try and achieve that goal.

It has become clear that a change is required to get the club back on track in line with our ambitions this season.

Under PellegriniWest Ham won 24 of their 64 matches, losing 29 and drawing 11.

The club will face Bournemouth on New Year’s Day with the Hammers yet to confirm who will be in charge for that clash.