Home News General News We Are Not Answerable To You, Nigerian Govt Replies UK, US, EU
NewsGeneral News

We Are Not Answerable To You, Nigerian Govt Replies UK, US, EU 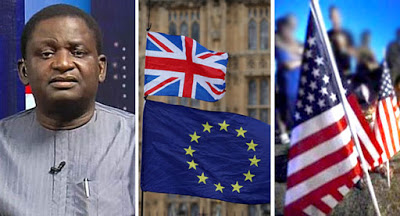 The Nigerian Government has asked the United Kingdom, the United States, and the European Union to stop meddling in its affairs.

President Muhammadu Buhari’s Special Adviser on Media and Publicity, Mr Femi Adesina, advised the countries and organisation to rather address the issues in their respective domains.

He stated this in response to a question on the allegations of human rights abuses by the Federal Government with a focus on those in detention, including the convener of #RevolutionNow movement, Mr Omoyele Sowore.

According to Adesina during an interview on Wednesday’s episode of Channels Television’s Politics Today, he said;

We are not answerable to either the U.S. or the UK or the EU; we are Nigeria, a sovereign country.

Those countries and entities have issues of their own; let them deal with their issues. Let Nigeria also deal with her internal issues. We are not answerable to them.

Apart from Mr Sowore, some of the notable Nigerians in detention include the leader of the Islamic Movement in Nigeria (IMN), Ibrahim Elzakzaky, his wife, Zeenat, as well as former National Security Adviser (NSA), Colonel Sambo Dasuki (rtd), among others.

Barely 24 hours after he was released on the order of the court, Sowore was rearrested by the Department of State Services (DSS) on Friday last week.

Sowore’s rearrest and the circumstances that led to it were strongly condemned by the civil society and Nobel laureate, Professor Wole Soyinka, among many others.

In his reaction, Adesina insisted that the criticism was from those he described as a minority compared to the large population in the country.

The President knows the truth about what is happening in the country, so there is no need for any worry or agitation.

But the question is who are these Nigerians and how many are they among about 200 million people?

Who are they? A tiny but vocal minority who will always complain. If they mistakenly get to heaven they will complain about conditions in heaven.

If there are genuine issues, they would always be looked into.

We respect Professor Soyinka. You don’t have too many of them in the country nor even on the continent.

Professor Soyinka is an avatar, he is well respected but do you know one thing, Professor Soyinka’s opinion will still be his opinion. It will be considered and if there are things to act on, they will be acted on.