VIDEO: Sweet Moment Davido Went On His Knee To Ask Chioma To Marry Him 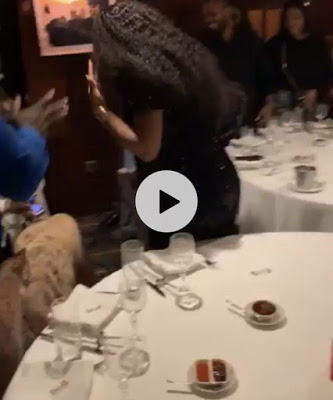 Kemi Olunloyo could be right, after revealing to the world that Chioma welcomed a “Baby Boy” with the famous Nigerian singer, Davido.

A video was released showing the time when Davido proposed to his pregnant girlfriend, Chioma.

Although many have argued that this is an old video and has just been released now, since Chioma could have gone to bed since then, confirming Kemi Olunloyo’s request.

The music star took his girlfriend to dinner at an expensive restaurant in London, where he proposed marriage.

According to Davido, Chioma accepted his proposal to be the wife of the Afropop star.

Responding to Davido’s proposal, Chioma said, “I love you @davidoofficial (You didn’t even let me wax yet 😭🤣)”

ALSO READ:  Cardi B Reveals What She Did In Her Lagos Hotel Room (Video)

Davido also took to his page to write, “She said yes”

In response, Chioma took to her own page to write; “I love you @davidoofficial (You didn’t even let me wax yet 😭🤣)”

Again, many people are of the opinion that the couple are only trying to change the narrative, by releasing details of the ‘proposal’.

View this post on Instagram
Chioma Spotted With Baby Bump As Davido Proposed To Her
A post shared by Quicknaija (@celebgistz) on Sep 12, 2019 at 4:59pm PDT