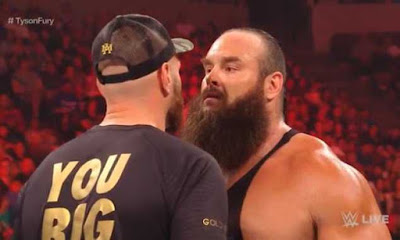 Tyson Fury had his first taste of WWE action after taking his feud with Braun Strowman to the next level by sparking a mass brawl on Monday Night RAW, MySportDab reports.

Fury first came to blows with the American wrestler on Smackdown last week, before being escorted from the building by security.

But the Gypsy King was back on Monday, invited as a guest on Monday Night RAW, where he demanded an apology from Strowman for being disrespected.

After being introduced to the US crowd, he said: ‘Last week I was here minding my own business, Braun tried to make me look like a fool. I wound up getting chucked out, so tonight I’m here to demand an apology.’

Strowman then entered the ring and hit back: ‘Look man, I was messing around and trying to have a little fun with you last Friday on Smackdown. That is, until I saw the way you looked at me like you wanted a piece of this.

‘I don’t know if you heard, but when security was dragging your a*** out of the building I was shouting “let him go” because I promise you, the last thing you want is to get in my ring. You have no idea what I’m capable of. I will literally eat you for lunch.’

After some more verbal sparring, things turned physical as Strowman lifted Fury into the corner before security burst into the ring to break the pair up.

See some photos after the cut… 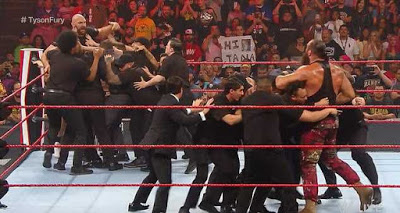 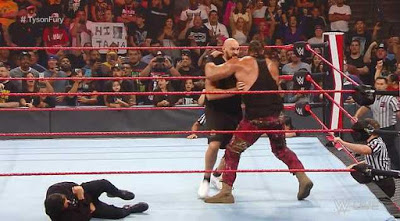 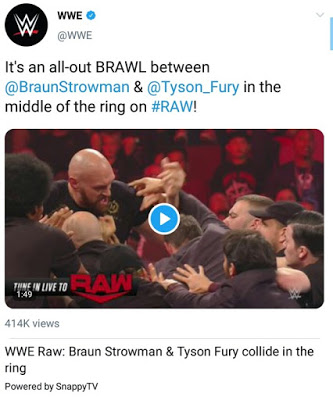 Watch the video below…

It’s an all-out BRAWL between @BraunStrowman & @Tyson_Fury in the middle of the ring on #RAW! pic.twitter.com/AHdGdEEbaJ