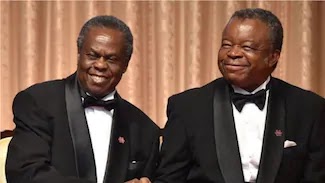 Omaswa got the prize because he has been able to address the crisis inherent in the global health workforce and built a health system that is pro-people around the globe.

On the other hand, Muyembe-Tamfum got the award for his research work that has been able to take on the challenge of Ebola head-on and his passionate effort in adequately training people who can handle deadly viruses and diseases.

The Hideyo Noguchi Africa Prize was instituted to honour people with great achievements in medical research and services aimed at combating infectious and other diseases on the continent.

The prize was officially called The Prize in Recognition of Outstanding Achievements in the Fields of Medical Research and Medical Services in Africa Awarded in Memory of Dr Hideyo Noguchi, and was first awarded in July 2006.

A brief public profile on Omaswa describes him as a Ugandan cardiovascular surgeon, an academic and administrator.

He is the present chancellor of Busitema University in Uganda, a position he has held since 2009. He was born in 1943 in Mukula village in the country and has had a very fulfilling professional life.

Jean-Jacques is the current general director of National Institute for Biomedical Research and was one of the first active teams that confronted the outbreak of Ebola in his country.

He had his medical education at the Lovanium University in Congo where he specialized in microbiology.
LEGIT