Home News General News 'This Is A Kindergarten Leadership At It Peak' - Apostle Suleman...
NewsGeneral News 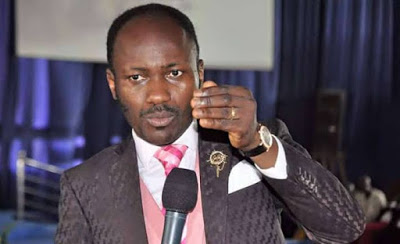 Following the reported release of about 1,400 repentant Boko Haram suspects on Tuesday by the Borno State Government.

The Borno State Commissioner for Information, Babakura Jato who disclosed this maintain that the suspects have been released in trenches by the military and rehabilitated into the society.

Reacting to the the reported release of 1,400 repentant Boko Haram members, apostle Johnson Suleman of Omega Fire Ministries, has lashed out at President Muhammadu Buhari adminstration.

Speaking In a post on Tuesday, Suleman queried the action, even as he wondered the fate of soldiers who fought Boko Haram following the insurgents’ release.

He further described the Buhari adminstration as a kindergarten leadership.

Heard that 1,400 repentant Boko Haram members have been released. I want to believe it’s not true.

What will be the motivation for soldiers to risk their lives fighting a sect that will always be later released?

This is kindergarten leadership at its peak, if it’s true very wrong.