There Will Be Food, Money Scarcity In 2020 – Nathaniel Unveils Prophesy 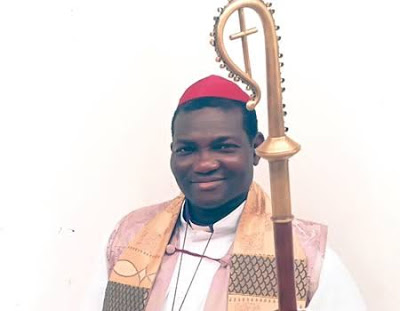 The founder of The Living Christ Gospel Church Nigeria and Overseas, Primate (Dr) Nathaniel F. Olorunsola, has released his own version of prophecies for 2020.

He maintain that Nigerians need prayers and fasting to avert calamities in the year 2020 and as well be partakers of the goodies of the new year.

According to him, the Lord said good and evil in the year 2020 are equal, but he assured that the Lord had blessings in stock for Nigerians, saying, “Let everybody begin the year with seven days prayer and fasting so that all the promises of God can come to pass.”

The cleric, who spoke at the church headquarters in Ado-Ekiti, the Ekiti State capital, during the presentation of his 2020 Revelation Book on Tuesday said;

There will be a series of political violence. Labour unions, lecturers included, will go on strike. Before the commencement of the new minimum wage, a lot would have happened. The beginning of the year 2020 will be tough. My advice is that people should save ahead of next year.

The downturn of the nation’s economy would lead to mass sack and companies folding up, there will be high death rate and upsurge of crime including armed robberies, herdsmen killings, cultists attacks, religious strifes, Boko Haram and ethnic militias’ activities next year.

Different intrigues will occur over the 2014 National Conference until the Federal Government adopts the conference report. The government will have no peace until it adopts the report or part of it.

The year 2020 hold a lot of promises as ordained by God for Nigeria and her citizens in all areas of human endeavour.

The Lord said 2020 will be a year of joy and blessing for God’s elect and those who know God. Many families will become rich. There will be promotion and progress in the country. Many youths will be appointed into new positions, some youths will get government jobs. Farming and animal rearing will be more pronounced in 2020.

In the political arena, Olorunsola added;

There will be intrigues among All Progressives Congress members over positions at states and federal levels which are capable of bringing setback to the party.

There will be some trouble among Peoples Democratic Party members that may cause segregation among them.

The two parties must seek love that will bring understanding among their members for the progress of the nation.