The Spirit Did Not Bring Money, Fake Pastor Who Killed Favour For Rituals Speaks 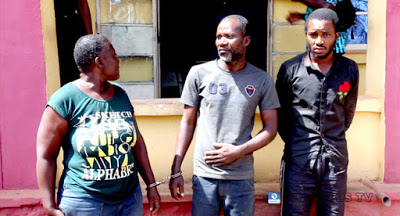 Freshresporters had earlier reported a news of Favour Seun Daley, a
22 year old lady who is a 400 level Theatre art student of Lagos State University (LASU) who was gruesomely killed and eaten by her friend and his mom with the help of a prophet [READ HERE].

The self-acclaimed prophet of a white garment church, Segun Philip, said the ritual of Favour Daley-Oladele did not work owing to the motives behind the act.

It was earlier reported that, the young lady visited her parents that reside at Osun State and she received a phone call from a friend identified as Owolabi Adeeko who asked for them to meet at an undisclosed location.

After the phone call, Favour disclosed to her parents that she will be going back to school after meeting the said friend.

Upon meeting with Owolabi, her phone stopped going through, she did not return calls and neither did she call any of her parents to inform them of her arrival at school.

The police was brought into the matter which led to revelations and confessions how the girl was killed and eaten.

According to Pastor Philip who confessed to the act said he and Owolabi wanted to use Miss Daley-Oladele for money ritual, without the knowledge of his mother

What Owolabi and I discussed is that when they use the concoction once, the money will come once, but his mother doesn’t know that; we just told her that when she uses it, she will be receiving contracts from everywhere.

But the spirit did not bring money at all, the ritual did not work.

Her friend, a 23-year-old Owolabi who reportedly connived with the pastor, narrated the incidence, showing remorse when asked a series of questions.

There was a well there already which the church was planning on using but they abandoned it for years. It was there we put the remaining part of her body then I covered it with sand.

my dad has lost his job for some years and my mum has been the one helping the family; she also lost her job, but she started doing some contract jobs. After some time, she stopped receiving contracts.

From that day, I started regretting my action, even before we were arrested.

While reacting to the incident, Favours father who is expecting her daughter to go for NYSC in a year time said;

It is quite emotional, having raised that girl for that number of years; Favour happens to be a golden girl to the family. We waited for some years before having her, she went to school and when we envisaged that in a few months, she will be going for her NYSC, and start celebrating a female graduate in the house, then some people conspire to kill her is touching.

All we want is justice for Favour and I believe it will serve as a deterrent to others who are in this kind of thing.