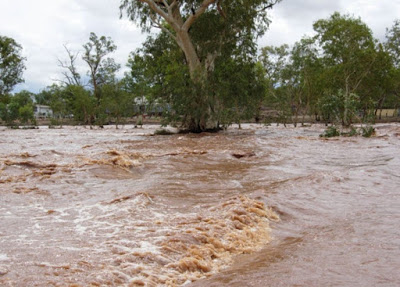 Rescue team have retrieved the body of a Kenyan teenage girl who drowned as she tried to save a man who was drowning in a swollen river in Kenya.

A 19 year-old girl identified as Ann Nduku fell into a River Kandisi in Ongata Rongai, on the outskirts of the capital Nairobi on Tuesday.

The girl, Nduku was trying to give an helping hand to the cries of help of a man who was clinging to one of the bridge structures under construction.

FreshReporters News gathered that the man survived but as she tried to save him she fell into the river.

Her mother, Elizabeth Mutuku, told me about the moment she learnt her daughter had fallen into the river and her desperate attempts to help her:

I saw her struggling in the water and I tried to save her. I called out to her Anna, Anna! I wanted to throw her a stick to try and pull her out. But the river was swollen and she was being tossed and tossed around and then it swept her away.”

The river is swollen after huge amount of rain which started on Monday and have been seen across East Africa.

However, residents say more than seven people have been swept away over the last two years.

An old bridge was removed two years ago and the construction of the new bridge is incomplete so residents have been using stepping stones to get to the other side of the river.

Maryam Zenneth, the elder sister of the deceased in her words blamed local authorities for failing to finish a crucial bridge that links the village to the main market town of Rongai.

Two good years many people are dying and they are sitting and watching people die. They come and grieve with you but do nothing else is happening.

Today it is my sister, who will be next? This bridge is the main Highway for kids who are going to school up here.

Why did they remove the bridge here to start building another one and they aren’t finishing it?”

Her mother is left heartbroken.

I am really sad. She would have been a future leader or a future teacher. To lose a life like this because of a bridge is just painful.”: her mother says.

Nigerian actress, Angela Okorie has tie the knot with her fiance, Desmond a.k.a Chuchu in a romantic beach wedding.
ALSO READ:  Saudi To Unveil 'Evidence' Linking Iran To Attacks As US Weighs Response
Read more
Education