Stay Away From Aso Villa – Presidency Tells SGF, Ministers, Others 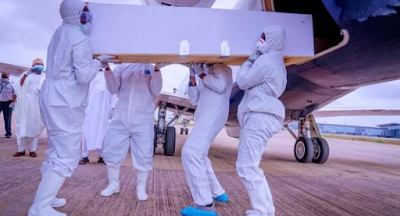 Prominent government functionaries who attended the burial of the late Chief of Staff to President Buhari, Abba Kyari, are asked to stay away from Aso Villa.

The burial which took place at Gudu cemetery, Abuja on Saturday, had top government dignitaries in attendance which included the Secretary to Government of the Federation and Chairman of the Presidential Task Force on COVID-19, Boss Mustapha; National Coordinator of the PTF on COVID-19, Dr Sani Aliyu; former Governor of Borno State, Senator Kashim Shettima; and Minister of Aviation, Hadi Sirika.

Others were the Group Managing Director of the Nigerian National Petroleum Corporation, Mele Kyari; Minister of Communications, Isa Pantami; Buhari’s spokesman, Garba Shehu and the Permanent Secretary of the State House, Tijjani ldris Umar, among others.

The Senior Special Assistant, Media and Publicity to president Muhammadu Buhari, Garba Shehu has said there is nothing ‘extraordinary’ about the order that those that attended the funeral should stay away from the Villa.

According to him, the directive is in line with the standard rules put in place by the National Centre for Disease Control, NCDC and the Federal Ministry of Health

There is nothing extraordinary about those of us who attend Abba Kyari’s funeral being advised to distance ourselves from the Villa.

He stressed that the Villa has operated ‘digitally’ in the last few weeks adding that “there is nothing new to this.”

There is nothing extraordinary about those of us who attend Abba Kyari’s funeral being advised to distance ourselves from the Villa.

Facebook
Twitter
Pinterest
WhatsApp
Previous articleI Have Sacrificed My Mother, Father, I Will Give Everything For Biafra – Kanu
Next articleLady Stripped Naked And Filmed For Stealing Milk In A Pharmacy