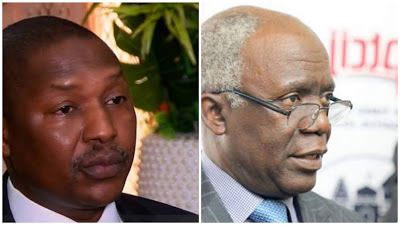 The minister of Justice and the attorney-general of the Federation, Abubakar Malami (SAN) had on December 24, explained reasons why the federal government decided to release the convener of RevolutionNow protest, Omoyele Sowore from his over four months’ stay in the Department of State Service (DSS) custody.

According to the Minister, the release of Sowore and the former National Security Adviser, Col. Sambo Dasuki (retd), was on compassionate grounds and not fuelled by pressure from any quarter.

In a counter statement, the human rights lawyer, Mr. Femi Falana on Sunday oppose Malami for claiming that he used his office to extend mercy to the two former DSS detainees.

He argued that the AGF had no power to release any person from custody on compassionate grounds.

As you are no doubt aware, only the President and state governors are entitled to exercise the prerogative of mercy or release any convicted person on compassionate grounds by virtue of section 175 of the Constitution of the Federal Republic of Nigeria, 1999.

In response to Falana, the minister of Justice accused him of twisting statutory provisions for “mischief”

Malami accused Falana of attempting to score cheap political points with the release Sowore, from detention by the Federal Government.

The AGF in a statement issued by his media aide, Dr. Umar Gwandu, accused Falana, who is Sowore’s lawyer, of concocting constitutional provisions for “mischief.”