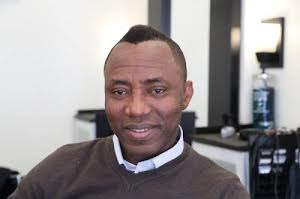 Marshal, who is a member of the team from the chamber of Femi Falana, had approached the judge in the open court shortly before the commencement of proceedings.

He called the attention of the judge to the fact that Sowore’s case file had not been returned back to Justice Taiwo Taiwo one week after Maha excused herself from hearing the matter.

But in her reaction, the judge accused the lawyer of grandstanding and disrupting her court session.

“Please journalists, know what you report, I have no hand in the matter again.”
Unfazed by that accusation, Marshal told the court that it was better for him to approach the judge in the open to avoid any misconception.

He demanded for the case file be taken back to Justice Taiwo, who have since resumed from vacation, for hearing to resume.

Recall that on August 28, Maha had declined to hear Sowore’s appeal over his continued detention of the Department of State Services by claiming that she did not have the jurisdiction to review the decision by Justice Taiwo, who granted an ex-parte order to the DSS to keep the activist for 45 days.

Sowore, through his lawyers, argued that the court breached his constitutionally guaranteed fundamental rights by approving that order for the DSS.

He was arrested in Lagos on August 3 for calling on Nigerians to take to the streets and express their frustration at the poor state of governance in the country.

Despite calls for his release from across the globe, the administration of President Muhammadu Buhari has continued to hold on to him.

Nigerian actress, Angela Okorie has tie the knot with her fiance, Desmond a.k.a Chuchu in a romantic beach wedding.
ALSO READ:  Buhari’s Administration Will Be Sent Into The Dustbin Of History - PDP Replies Oshiomhole
Read more
Education