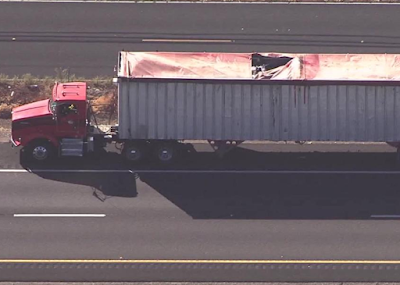 A skydiver was killed after she hit a big rig trailer and crash-landed on a Northern California highway outside an airport.

According to PIO Ruben Jones, told CNN that the 28-year-old woman was skydiving with a group of seven people around 2 p.m. Thursday, California Highway Patrol(CHP).

The group took off from the Lodi Parachute Center.

CNN has reached out to the facility for comment.
Conditions were windy, and the woman crashed into the truck during the skydiving group’s descent near the Lodi Airport, Jones said.

Then, she hit the right-hand shoulder of the road, the California Highway Patrol said in a Facebook post. The unidentified woman was pronounced dead at the scene.

FreshReporters News understood that the other six people in the group survived.
The station spoke to Lisa Reyes, who was driving with her father and brother on Highway 99 when the woman crashed.


“The way the person was struggling, just struggling against the wind and their body was just moving really, really fast,” she told the station. CHP is investigating the incident.