Singapore: How Technology Is Used To Solve Water Shortage Problem 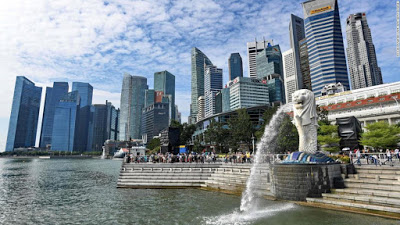 Singapore uses about 430 million gallons of water every day — a number it expects could double in the next four decades.

That kind of consumption is piling pressure on the Asian city state to address growing concerns about global water scarcity. So it’s building new technology to prepare itself for a future where obtaining clean water will be even more difficult.

“Singapore truly has become a global water hub,” said Shane Snyder, executive director of the Nanyang Environment & Water Research Institute at Singapore’s Nanyang Technological University. “But as it stands, it imports approximately 40% of its water today. And with climate change, that water has become far less dependable.”

Rapid urbanization and rising global temperatures are making access to natural water sources increasingly hard to come by. Today, a quarter of the world lives in areas of high water stress. Experts say we’re consuming natural resources faster than the earth can replenish them.

Singapore, meanwhile, is home to more than five million people and is covered in fountains, reservoirs and other water features — including the world’s tallest indoor waterfall, a 130-foot Rain Vortex that pumps 10,000 gallons of water per minute. But it has no natural water sources of its own, instead relying heavily on recycled water and imports from its neighbors.
Singapore is home to the world’s tallest indoor waterfall, which pumps 10,000 gallons of water per minute.

Snyder’s research facility is one of several places developing solutions for Singapore’s water dependency. The hope is to create projects that could be used across the city.
“What we have become used to as reliable water, may quickly change — so we have to be prepared, we have to be thinking about the infrastructure in advance,” Snyder said. “There’s a big drive to become water independent — to control our own future — and that is largely dependent on the technologies we’re developing.”


One development:
A small, black sponge called carbon fiber aerogel that the university says can clean waste water on a mass scale. The sponge absorbs 190 times its weight in waste, contaminants and microplastics.

The material is being further developed for commercial use by Singapore-based startup EcoWorth Technology. CEO Andre Stoltz said the company will first enter Singapore’s waste water market before eventually developing this material for use on a global scale.

“We believe it’s potential impact is very big,” Stoltz said, adding that the product allows the company “to convert waste products to something of worth.”

Another company, WateRoam, is already taking innovation from Singapore to the rest of the region. Founded in 2014, WateRoam says it has developed a lightweight, portable filtration device that they say has already provided clean drinking water to more than 75,000 people across Southeast Asia.
WateRoam CEO David Pong said one of the most innovative aspects of the product is its simplicity.

“We’re going with a no-frills approach because we’re looking at water as a basic problem and a basic commodity … and as a result, we needs basic technology to solve this problem,” Pong said. “We want people who are laymen — not specialists or engineers — to be able to pick up this product and intuitively know how to use it.”

ALSO READ:  US Honours Nigerian Lady For Contribution Towards Farming

“We’ve been very blessed to have access to clean drinking water,” Pong said. “It’s a privilege that we should be able to bring forth to the rest of the region, and advocate that clean water is an essential aspect for life on earth.”