Home News Politics Show Us Where To Borrow Money Apart From China - Amaechi To...
NewsPolitics 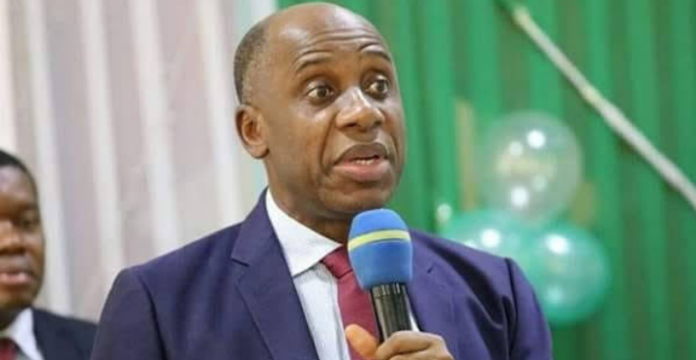 The Minister of Transportation, Rotimi Amaechi, said the national assembly should show the government where to borrow if it not comfortable with government’s borrowings from China.

Ameachi said this while expressing worries about probes by the lawmakers on loans collected by Nigeria.

He stressed that such probes could stall the release of more funds to the country.

The minister said efforts were being made to repay the loans, particularly the ones from China.

He added that the National Assembly’s investigations should not frustrate the construction of rail projects.

Reacting to the probes, Amaechi said:

I have told the House of Representatives that first I just got to know that there is a clause in the agreement (with China).

It is simple; for example, the loan to construct Ibadan to Kano rail is $5.3bn.

The implication is that if by the end of the day, you don’t pay back our money, whatever we need to take from you, we will take from you.

But what the Chinese normally do is that they go after the same asset to recover their money.

So what is wrong with that?

If the lawmakers felt that borrowing from China was wrong, they should tell the Federal Government where to get loans from for infrastructure development.

Secondly, I have told the National Assembly that there is nothing wrong with investigation.

It is part of their responsibility, but for now they will jeopardise the ability of government to raise money if we continue to ask questions that will make China to raise eyebrow and start wondering what is wrong.

Amidst attacks by terrorists in some parts of the country, The Minister of Information and Culture, Lai Mohammed has given reason why Nigeria will...
Read more
Politics

Break through for exited N-power beneficiaries as the federal government lunch portal to enable them apply for empowerment options made available by the Central...
Read more