Woman Gives Birth To Baby Girl After 10 Years Of Pregnancy 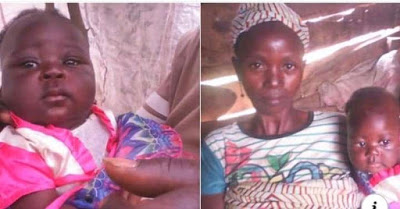 A woman identified as Elizabeth Packal who lives in Eiyeosoka village, Ofiki in Atisbo local government area of Oyo state, gave birth to a baby girl after 10 years of pregnancy.

Elizabeth, after delivery, said she did not know who impregnated her, owing to the nature of her sickness that kept the pregnancy for 10 years.

It was gathered that the doctor in charge of the hospital, Dr Okawoyin David disclosed that when they brought Elizabeth to his hospital, he inquired of where she was diagnosed for pregnancy and the lady’s father, Ahmadu Guruma Packal, responded that they don’t known the true nature of her sickness, having taken her to several hospitals, both orthodox and unorthodox, including Baptist Medical Centre, Saki.

The father added that it was some of his friends who suggested that she should be taken to Alaafia Tayo Clinic and Maternity Centre in Ofiki where she eventually gave birth to a baby girl. Both Guruma and Dr Olawoyin was said to have been surprised after she Elizabeth gave birth.

According to Dr Olawoyin when they brought Elizabeth and asked how long she had been sick, the lady’s father said since 2010,

The doctor said she should be referred to a superior and sophisticated hospital at Ago-Are or Saki but her father refused until the lady finally gave birth.

Doctor Olawoyin said that the case might be fibroid before pregnancy because after delivery, her stomach was still swollen as if there was another pregnancy in it, adding that it is very difficult medically for fibroid and foetus to stay together, adding that it was a mysterious development.

“Too Much Humility Is Self-destructive” – Actress Chika Ike

The Nollywood actress, Chika Ike explains that being humble is great but people should know when to switch it up because people take your humility for foolishness or timidity and too much of it can destroy you.
Read more
Education

Nigeria confirms 97 new cases of COVID-19 on September 9, having carried out a total daily test of 2,609 samples across the...
Read more
Entertainments

Ozo And TrikyTee Has Been Evicted From The BBNaija House BBnaija show host, Ebuka announced Ozo as the...
Read more