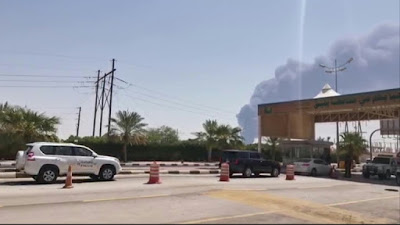 Saudi Arabia said it will unveil evidence on Wednesday linking regional foe Iran to attacks on key oil installations, as US Secretary of State Mike Pompeo heads to the kingdom to discuss possible retaliation.

Riyadh, which is bogged down in a five-year war against Tehran-aligned rebels in neighbouring Yemen, has said that the weapons used in the strikes were Iranian-made, but has so far not directly blamed its arch rival.

However, the Saudi defence ministry said its spokesman would present evidence from the site of the weekend attacks that halved Saudi oil production, sending global energy markets into a tailspin.
He “will announce the final results of the investigation and present material evidence and Iranian weapons proving the Iranian regime’s involvement in the terrorist attack,” the ministry said.

Crown Prince Mohammed bin Salman, the de facto ruler, on Wednesday said the attack on the heart of the kingdom’s oil industry was a “real test” of global will, while urging the international community to take a “firm stance”, state media reported. 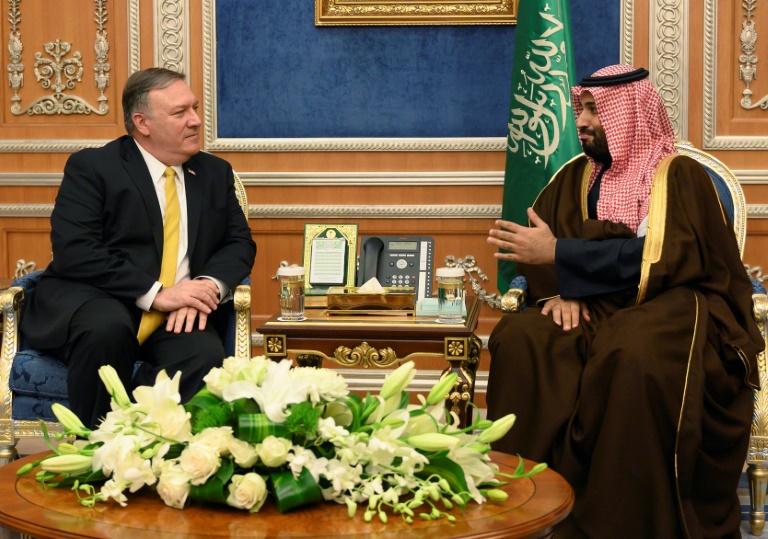 Late Tuesday, Energy Minister Prince Abdulaziz bin Salman said international investigators, including from the UN, were joining the probe, having announced that output would return to normal by the end of the month.

The kingdom wants “proof based on professionalism and internationally recognised standards,” he said.
The Saudis will present the evidence ahead of Pompeo’s arrival.
The US chief diplomat is set to meet with Prince Mohammed to discuss how to respond to the strikes, which the US says originated in Iran.

“As the president said, we don’t want war with anybody, but the United States is prepared,” Vice President Mike Pence said in a speech in Washington on Tuesday.

A US official, speaking on condition of anonymity, told AFP that the administration has concluded that the attack involved cruise missiles from Iran and that evidence would be presented at the UN General Assembly next week.

The apparent hardening of the US position came as Iran’s supreme leader Ayatollah Ali Khamenei ruled out negotiations with Washington “at any level”. 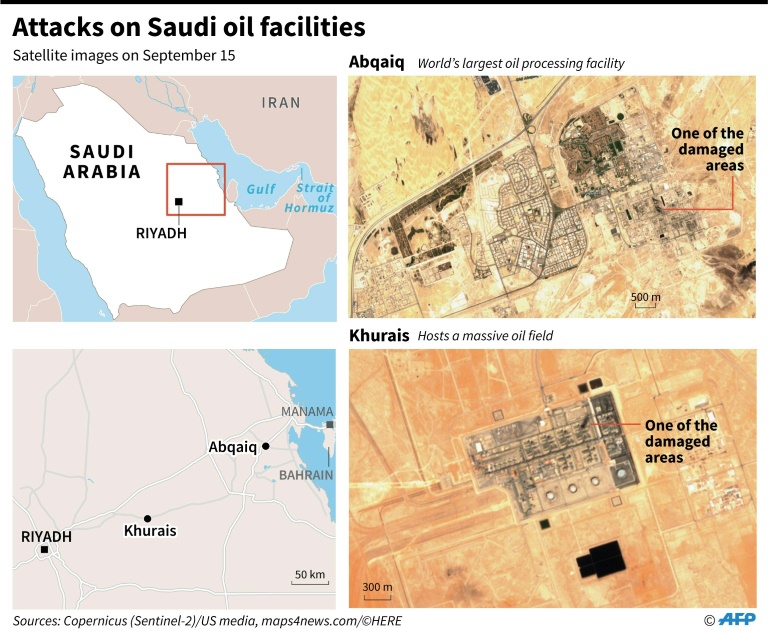 This appeared to nix remaining hopes for a dramatic meeting between President Donald Trump and his Iranian counterpart Hassan Rouhani at the United Nations next week.

Speaking to reporters on Air Force One over California, Trump said he too had cooled on what had always seemed to be a diplomatic longshot.

“I never rule anything out, but I prefer not meeting him,” Trump said.

Yemen’s Huthi rebels claimed responsibility for Saturday’s oil installation attacks, which took out six percent of global supplies.
But a senior US administration official cast doubt on that claim, saying that while the Huthis said they used 10 drones, one Saudi oil facility was hit “at least 17 times,” and another twice by “precision-guided munitions.”

Additionally, neither the type of drone “nor the cruise missiles employed in the attack can reach the facilities from Yemen. It’s not possible,” the official said.

Observers say the torrid experience in Yemen, where despite their vast firepower, the Saudis have failed to subdue the ragtag but highly motivated militia, has made Riyadh circumspect about wading into another conflict.

“I certainly hope we’re not (going to have another war),” Riyadh’s ambassador to London Prince Khalid bin Bandar told the BBC in an interview.

“Almost certainly it’s Iranian-backed, but we are trying not to react too quickly because the last thing we need is more conflict in the region,” he said.

Iran has stuck with its account that the Huthi rebels are responsible, with Rouhani saying Wednesday that they carried out the strike as a “warning” about a possible wider war in response to the Saudi-led intervention in Yemen.

State media said Tehran had written to Washington through the Swiss embassy on Monday denying any role in attacks on Saudi oil installations and warning it would respond to any action.

The message “emphasised that if any actions are taken against Iran, that action will face an immediate response from Iran and its scope will not be limited to just a threat,” the official IRNA news agency said.
AFP