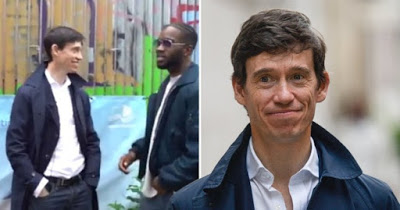 London mayoral hopeful Rory Stewart has been accused of racism after describing three men he met in a campaign video as ‘minor gangsters’.

Labour MPs have slammed the former Tory cabinet minister for stereotyping the trio, who he approached while vying to replace Theresa May as party leader over the summer.

The three men, who are an Irish hip-hop act, said the comments ‘come from a racist place’. Stewart received praise and ridicule alike after the awkward encounter filmed on Brick Lane admitting ‘you can’t win ‘em all’ when he posted the clip on social media.

The trio identified themselves as from Ireland but did not mention what they do for a living.

According to the Guardian, Stewart referred back to the clip at an event in London’s Emmanuel Centre.

He said:  ‘One thing about social media is that it allows people to see politicians listening.


‘I can go to Brick Lane and three sort of minor gangsters can come up to me and spend a minute telling me I’m an idiot. ‘And I can film it on my phone and put it up.

And people love watching people being rude to politicians.’ In response to the report, Labour MP Diane Abbott tweeted: ‘This is racism. And it is completely shameful. Especially when it comes from someone running to be the mayor of our diverse and multicultural capital city.’