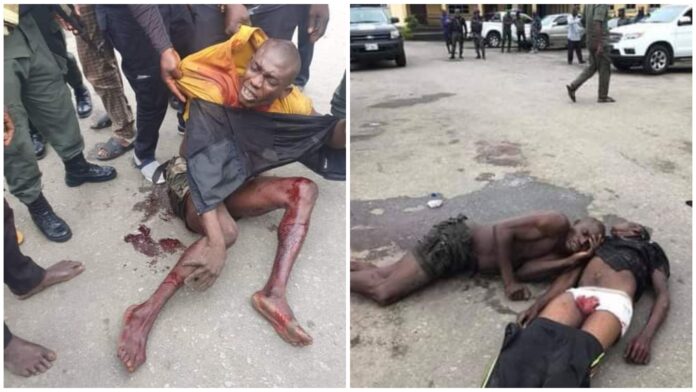 The Rivers State Police Command arrested the notorious criminal accused of terrorizing some parts of Ogoni axis and being behind series of criminal activities in the area.

Spokesman of the Command, SP Nnamdi Omoni disclosed this on Saturday morning, September 12, while showing the wounded suspect and that of his alleged second in command said to be his younger brother, at the command headquarters.

According to SP Omoni, the suspect was arrested alive in the early hours of today, in a joint security operation with a local security outfit at Koro community in Tai local government area of the state.

The Nigerian police have bursted another baby factory in Ogun state, just few days after 10 victims were rescued from one at Ofada, Mowe,...
Read more
Crimes

A final year student of political science at the Nwafor Orizu College of Education, Nsugbe, NOCOED, was found dead just some days away from...
Read more
Crimes

A 47-year-old man identified as Emmanuel Thompson Udo, have been sentenced to life imprisonment for having forceful canal knowledge of his 14-year-old stepdaughter. The rapist...
Read more
Crimes

The Abuja Zonal Office of the Economic and Financial Crimes Commission, EFCC, on Wednesday, December 2, 2020, arraigned three suspects before Justice A. I....
Read more
Crimes

Man Rapes 11-year-old Girl, Threatens To Beat The Victim And Her Mother In Akwa Ibom (Photos)

An unnamed 11-year-old girl is alleged to have been raped by an unidentified man in Eket Akwa Ibom state. A twitter user identified as @deebadniceguy...
Read more
Crimes

A Woman was arrested in Brazil after her baby bump turns out to be a watermelon filled with cocaine. PROMO SALES to round up the...
Read more