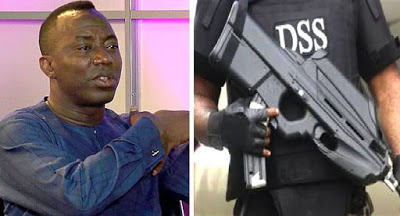 Nigerians were thrown into a state of confusion when the Department of State Services (DSS) rearrested the convener of RevolutionNow movement, Omoyele Sowore after he was granted bail by the court.

Responding to their action, the Department of state service (DSS) said they re-arrested the convener of RevolutionNow Movement, Omoyele Sowore because he ‘resorted to act against the law.

DSS spokesperson, Peter Afunanya made the disclosure in a statement on Saturday.

According to him, Sowore had shortly after being released from custody, addressed a group of persons, reassuring them of his continued intention to create anarchy in the country.

The statement accredited to the DSS reads;

Recall that last Friday, DSS operatives allegedly chased out lawyers from the courtroom and attacked journalists after which they re-arrested Sowore.