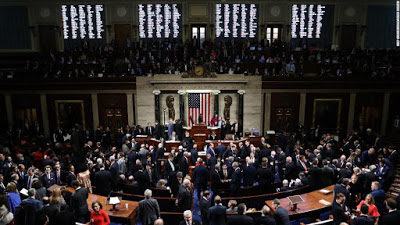 President Trump has become the third president in history to be impeached.

The House passed both articles of impeachment: abuse of power and obstruction of Congress.

Here’s what you need to now about the vote:

The House voted 230-197 to charge Trump with abuse of power and 229-198 to charge him with obstruction of Congress. Just two Democrats voted against both articles, Reps. Collin Peterson of Minnesota and Jeff Van Drew of New Jersey, who is expected to soon switch parties. A third, Rep. Jared Golden of Maine, voted for one impeachment article. Republican-turned independent Rep. Justin Amash of Michigan voted to impeach Trump on both counts.

Rep. Tulsi Gabbard of Hawaii, who is running for the Democratic presidential nomination, voted present for both articles.

Trump held the longest rally speech of his presidency:

Trump acknowledged the vote to impeach him, which occurred as he was speaking on stage at his nearly two-hour campaign rally in Michigan tonight. The votes occurred in the middle of his speech. It appeared he learned of the vote tallies from an aide. Trump used the result to tout Republican unity.

The vote shifts the impeachment proceedings to the Senate, where a trial is expected in January. Senate Majority Leader Mitch McConnell told Republican senators at a policy lunch Tuesday that he will announce by the end of the week the date for the start of the Senate trial, according to sources. The Senate will decide whether to convict Trump and remove him from office.