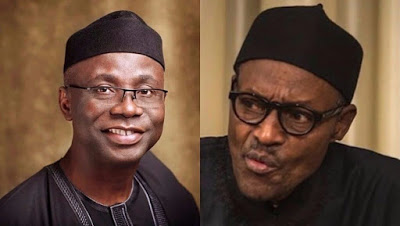 Following an advice from Pastor Tunde Bakare on Sunday, admonishing president Muhammadu Buhari to put in place a succession system, saying leaders in countries like China, Singapore and South Africa put in place such succession plans.

In a counter reply to the clergy man, The presidency on Monday, told Tunde Bakare, said the president though interested in who would succeed him, “will not pick a successor.”

We must also learn from Nelson Mandela who stepped aside after one term, but not without positioning the likes of Thabo Mbeki and Cyril Ramaphosa.

Therefore, even as we build institutions of democratic governance, a key responsibility that history has bestowed on President Muhammadu Buhari at this turning point in our journey to nationhood is to institutionalise systems of accurate succession that will build and sustain the Nigeria we desire. This is a task that must be done.

Responding to pastor Bakare on Monday,
while appearing on a Channels Television programme, Mr Adesina said that like anyone in a position of authority, Mr Buhari has an exit plan.

By May 2023 God willing he would have finished his second term as president, he would not have stood for another term and he will be exiting. So, he has that at the back of his mind.

The president will not pick a successor. We know him, he is not somebody like that. Will he be interested in the process? Yes, he will. He will ensure that there is a free, fair and credible election; that nobody will come to use money and resources to bamboozle his way into the leadership of the country. It will not happen. The president will ensure free, fair and credible process; but to handpick a successor? No, he will not do that.

According to Adesina, Mr Buhari would not hand “Nigeria over to those who will take her back or hand Nigeria over to looters once again, “No, that will not happen,” he said.

ALSO READ:  It Is Wrong For A Man Who Lost Election To Call For Revolution – Muslim Group Blasts Sowore

Mr Adesina also spoke on Mr Buhari’s commitment to reforming Nigeria’s electoral law and whether he would act early enough to ensure the reforms.

Mr Bakare’s statement is coming about a week after he paid Mr Buhari a visit, and he has, at different fora, postured himself as a potential successor to President Buhari.

Pastor Bakare who was the running mate of then-candidate Muhammadu Buhari in the 2011 presidential elections, last year said there was a divine arrangement for him to become Nigeria’s president when Mr Buhari’s tenure ends in 2023.
ALSO READ:  NCDC Reacts To Coronavirus Report On Abba Kyari
Facebook
Twitter
Pinterest
WhatsApp
Previous articlePhotos: Shiites Members Burn US Flag, Demands El-zakzaky Release, As they Protest In Abuja
Next articleNo Law Compels Buhari To Publicly Declare His Assets – Femi Adesina