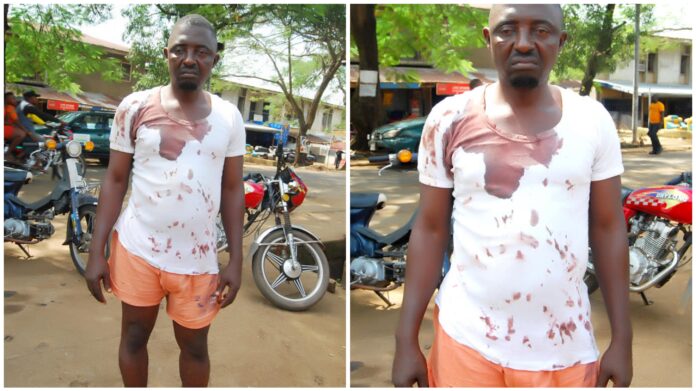 A Calabar based lawyer, Joseph Arikpo has accused a DPO and his officers in Cross River State of brutalising him.

According to him, the DPO gave him the inhumane treatment when he went to solicit the bail of a young man who had been in detention for over six days.

He said the incident happened at the Divisional Police Headquarters in Ikom, on Sunday, November 8.

Man Brutalised By Soldiers Who Mistook Him For Someone Else (Photos)

Policeman Brutalises Fiancee, Boasts Of Being Above The Law

Narrating his ordeal on Tuesday morning, November 10, Arikpo said trouble started when the DPO called him a stupid man.

Arikpo claimed that when he asked not to be insulted, the DPO ‘punched him repeatedly and afterwards threw him into cell where he was further assaulted by some officers.’

Will this POLICE BRUTALITY EVER END?
On the 8th on November 2020, I was consulted by my client to solicit the bail of a young man who had been detention at the Divisional Police Headquarters Ikom Cross River State for over six days for no just course. In adherence to the cap rank rule, I went there, met with the DPO Ikom, introduced myself and told him that I was there to solicit for the bail of my Client who had been in detention for over Six days. The DPO told me that he was not going to release him, because according to him, he intends to arrange for a meeting between the complainant and the accused on Wednesday 11/11/2020. But I told him that he should release him for me, and that I was going to provide the suspect on the day fixed for interview, but the DPO refused. When I tried to remind the said DPO that my client still had his Constitutional right of freedom to liberty and dignity of his human person, he(the DPO) told me that I was stupid. In my response, I told him that I am not stupid, and took exception to that insult on my person. The DPO came closer and closer and eventually started punching me. He did it repeatedly while repeating the words “I say you are STUPID” When he came very close, I could perceive some smell of alcohol. So, I saw the need to run. When I tried to run out of the Station, he commanded a female police officer that was nearby to close the gate, and ordered another female police to “bring him some chemical mess” (tear gas) which he used on me to the cell for detention. After taking me into the cell, he assigned an IPO, to record my statement. During the period of recoding my statement, they handcuffed me and used barton and whips to bater me, just to make sure that I wrote what they wanted as my statement.
At night while I was in the cell, the DPO sent a female police officer to come and seize my blood stained shirt so as to conceal the evidence that I was brutalized, but God help me, as I had hidden same before they came. Thank God for the NBA IKOM Chapter that came to my rescue!

Residents of KwaZulu-Natal in South Africa on Saturday, 28 November recovered bodies of three children who were electrocuted in a stream. The children who all...
Read more
Society News