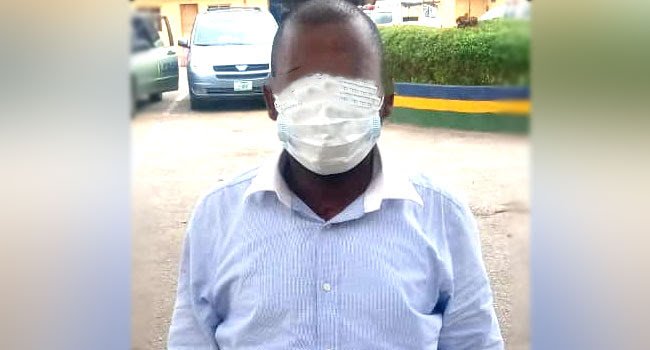 Police rescue a 45-year-old man, Adeyinka Abiodun who attempted to commit suicide over a N500,000 debt he owed a microfinance bank in Lagos.

The Lagos police spokesperson, Bala Elkana confirm this in a statement on Sunday.

He said a officer intercept the man while attempting to jump into the Third Mainland lagoon on Friday.

According to the police, the man collected a N390,000 loan from a microfinance bank in March.

The loan exceeded N500,000 with accrued interests and Abiodun was unable to pay back.

While attempting to jump into the lagoon around 1:35 p.m. on Friday, police deployed to Third Mainland Bridge intercepted him .

The officers took him to Bariga Police Station for questioning and debriefing.

He stated that, in March 2020 he procured a loan of N390,000 with monthly repayment plan for six months

With an accrued interest of #142,287:25 from a microfinance bank in Lagos Island.

Abiodun collected the loan with intent to upgrade his wine retail business, but the business failed and the money lost.

He holds a Bachelor of Science degree in Physics and a Masters Degree in Business Administration.

Abiodun is with a wife and two children, and is currently attending medical and counselling sessions.

The microfinance bank was contacted and they confirmed the loan

The Lagos governor Babajide Sanwo-Olu, moved with compassion after hearing the story Paid the loan.

Man Shot Dead As Youths Protest POS-Carrying Policemen In Delta State A young man was gunned down in an...
Read more
Society News

The body of a 14-year-old boy, Ricky Ganya has been found dead inside a crocodile's stomach.
ALSO READ:  Police Arrests Man For Shooting His Friend Over N1,000 Debt In Anambra (Photos)
Read more
Society News

Accident in Sapele, Delta state claims 3 lives including a boy and 2 girls. The deceased who were driving...
Read more
Society News

COVID-19 A Mere Noise From Hell, It's Just Like Fever says Oyedepo Since the outbreak of coronavirus in Nigeria,...
Read more
Society News