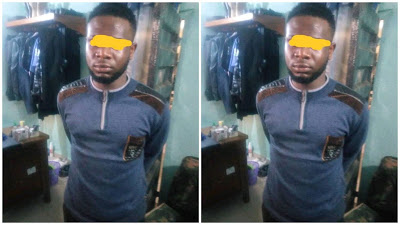 A 22-year-old, Ikechukwu Okoli, a native of Ndilionwu village in Orumba North LGA but reside at Uzoegwu Street Nkpor in Idemili North LGA of Anambra State, has been arrested by police operatives attached to Isiuwulu Division for allegedly defiling a ten years old girl.

The suspect allegedly defiled the minor in his room.

The Scene was visited by police detectives and victim taken to the hospital for medical examination where laceration of her hymen was confirmed.

Meanwhile, the Commissioner of Police, CP John B.Abang,fdc has directed that the case be transferred to the State Criminal investigation Department, Awka for discreet investigation after which suspect would be charged to court for prosecution.