Police Arrests Man For Shooting His Friend Over N1,000 Debt In Anambra (Photos) 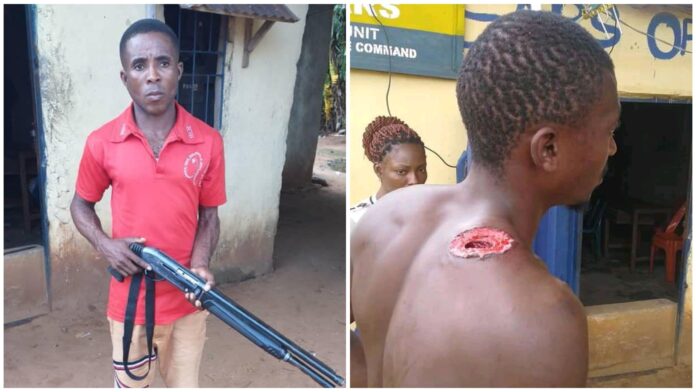 Police operatives attached to the Command Special Anti Robbery Squad, SARS, has arrested one 27-year-old Friday Asuquo for allegedly shooting one Kingsley Araino at his back.

The suspect who hails from Oron but resides at Enu-orji village, Amawbia in Anambra State, had a misunderstanding with the 27-year-old victim over One thousand Naira debt.

Following the altercation, the suspect quickly rushed inside one city of restoration church Amawbia, brought out a pump action gun loaded with four live cartridges and allegedly shot the victim at his back.

Police operatives who visited the scene of the incident rushed Araino to Amaku General Hospital Awka for medical attention.

A pump action, three live cartridges and one expended cartridge were recovered from the suspect and he also confessed to the offence voluntarily.

Police arrests 2 brothers over armed robbery in Anambra State at about 9:am, on 22/9/2020. The state police command...
Read more