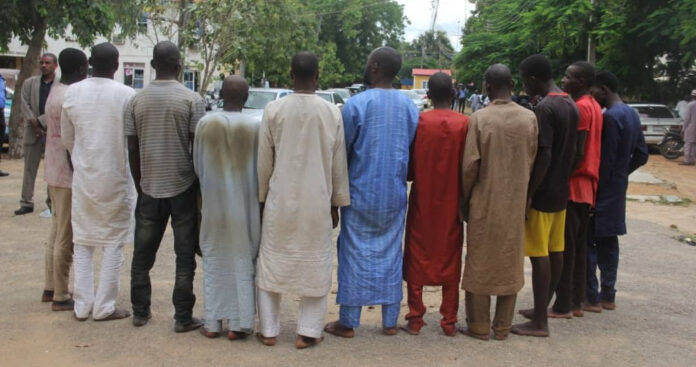 The suspects identified as Usman Adamu, 20, Adamu Muhammad, 21, Nura Musa, 20, and Khalid Abdullahi now at large are all from Nasarawa area in Misau, Bauchi.

Bauchi police spokesperson, DSP Ahmed Mohammed Wakil said the suspects kept the victim in a house located at the Nasarawa area for almost a month were they all allegdly raped her. They were arrested after the police were alerted.

While the suspects have reportedly confessed to the crime, the girl was rushed to General Hospital Misau for medical examination.

Moreover, on receipt of the report a team of detectives drafted to the scene victim was rushed to General Hospital Misau for medical examination, suspects were arrested and they confessed to the crime. Investigation is on progress after which suspects will be charged to court for prosecution as soon as possible

Angry mob set a thief ablaze after they robbed a woman of her mobile phone and undisclosed sum of money in Ethiope West Local...
Read more
Crimes

The Anambra state police command have arrested a 21-year-old lady identified as Emila Sunday for attempting to sell her 3-months old baby. The lady who...
Read more
Crimes

A yet-to-be named man who became mad of recent use a cutlass to inflict deep wounds on a woman leading to her death. The tragic...
Read more
Crimes

55-year-old Man Arrested For Being In Possession Of 4 Human skulls, 2 Dry Human Hands And 3 Jaws

A 55-year old man, identified as Yesiru Salisu have been arrested by the police for being in possession of four human skulls, two dry...
Read more
Crimes

Three children identified as Chibugo Eze, Chinenye Eze, and Ebuka Ene, who went missing after they went to fetch water at a commercial borehole...
Read more