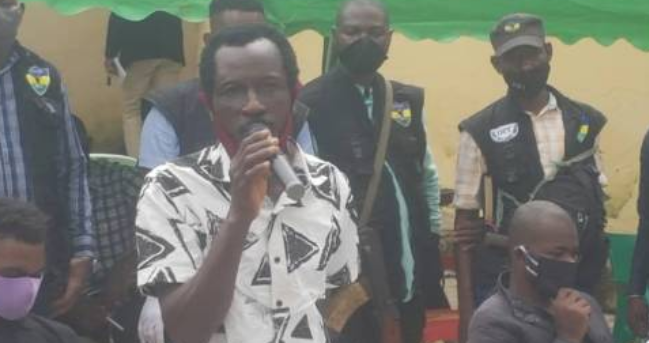 Ogun state police command has arrested a 52-year old pastor, Adetokunbo Adenokpo, for abducting a dispatch rider and detaining him in an underground facility in his church.

The police arrested the suspect at Lokosi area of Sagamu on July 17, 2020.

The suspect were paraded on July 29 by the police spokesperson, Frank Mba.

He said the pastor is the general overseer of the new Life Church of God, Sagamu, Ogun state.

Mba said the pastor confessed that he ventured into kidnapping so he could raise money for his charity works.

Nemesis caught up with him after he and his members of his gang abducted a dispatch Rider, Job Ekpe Jonathan

The victim had come to his church to deliver some products.

Adelopo who said he had spent over 20 years in the ministry, stated:

I was ordained as a pastor by Bishop Abayomi in Ibadan in 2014.

We do a lot of charity in my church and during this COVID-19 pandemic period.

I didn’t have anything in my account and people were still coming for help.

We needed money to buy foodstuffs and ram for this Sallah and that was why I decided to source money from these companies by kidnapping their staff.

The kidnap victim, Mr Job, narrated his ordeal, he said:

I spent 10 days in captivity inside an underground hole, which they called ‘Special Guest House.

I was only fed with garri, sugar and beans.

When I got to the church to deliver the items, they put a rope around my neck from the back and I started struggling to free myself from the rope.

When they finally brought me down, the pastor injected me and that was the only thing I remember.

They were feeding me with garri, sugar, beans, coke and water.

I spent about nine days in that hole and was rescued by the police on the 10th day.

I have never experienced such a thing like that before.

Househelp Kill Former Boss, Cart Away With Some Of His Belongings (Photos)

A 27-year-old man identified as Cephas Iliya, have been arrested by the police for killing his boss identified as Martins Omeri at night...
Read more
Crimes

Two elderly men have unleashed terror on a 13-year-old girl at new GRA area of Bauchi state by raping the minor on different occasions. The...
Read more
Crimes

The police have arrested three family members, Son, mother and uncle for illegal dealings in Indian hemp in Kano state. The son who was identified...
Read more
Crimes

Angry mob set a thief ablaze after they robbed a woman of her mobile phone and undisclosed sum of money in Ethiope West Local...
Read more
Crimes

The Anambra state police command have arrested a 21-year-old lady identified as Emila Sunday for attempting to sell her 3-months old baby. The lady who...
Read more