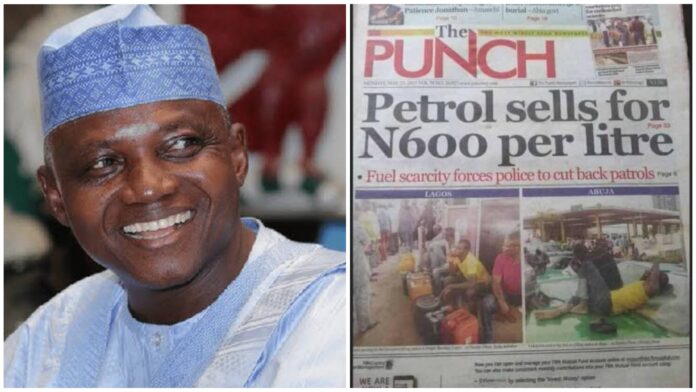 Nigerians have been reminded that petrol was sold for N600/litre under the Peoples Democratic Party, PDP, administration.

President Muhammadu Buhari’s spokesperson, Garba Shehu, made this reminder in a tweet alongside the front page of a newspaper from Easter Sunday in 2013, in response to PDP claiming citizens may not survive the increment in electricity tariffs and price of petrol.

PDP explained that the level of poverty in Nigeria was too high.

Don’t allow the PDP to deceive you. Amidst acute shortages, they sold petrol at N600 per litre on Easter Sunday in 2013 (See Punch published on that day).

It can be recalled that the federal government through the Petroleum Products Marketing Company (PPMC), recently increased the ex-depot price of petrol from N138.62 to N151.56 per litre.

Petrol marketers subsequently increased the price of the product from N148 to between N158 and N162 per litre.

However, the FG says it is no more going to be releasing guiding price bands for the sale of Premium Motor Spirit, popularly called petrol, at filling stations.

Based on this, the downstream arm of the oil and gas sector had been fully deregulated.