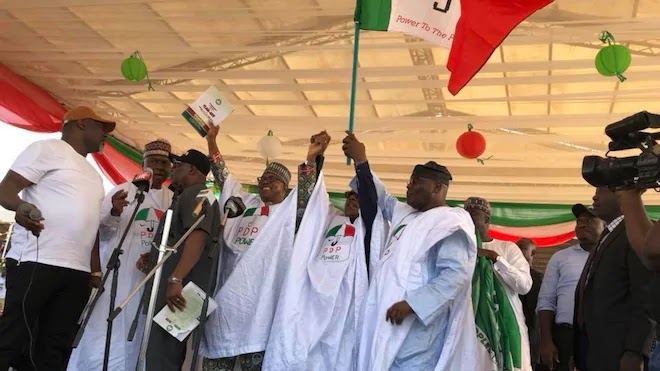 The Peoples Democratic Party (PDP) has expressed optimism that its presidential candidate, Atiku Abubakar, will emerge victorious at the election tribunal just like it did in Zamfara state.

The party in a statement on Saturday, May 25, issued by its national publicity secretary, Kola Ologbondiyan, in Abuja, congratulated Zamfara state governor-elect, Bello Matawalle, all federal and state legislators-elect on their victory in the 2019 general elections.

Ologbondiyan described the outcome of the elections as the triumph of the will of the people over manipulative forces.

In congratulating the people of Zamfara state, the PDP expressed optimism that justice will prevail in its effort to retrieve all its stolen mandate, particularly the Presidential mandate that Nigerians freely gave to @Atiku, at the courts. #AtikuIsComing #RescueNigeria pic.twitter.com/iiPq9udw1A

He said that the victory was a clear pointer to the fact that no matter how long manipulations and anti-democratic tendencies appeared to be to thriving, justice and the will of the people would always prevail eventually. He assured the people of Zamfara of a purposeful, people-based, and result-oriented leadership that would unite and revitalise the state for the greater good, in line with the wishes and aspirations of the people.

ALSO READ:  We Won’t Rest Until Nigeria Is Safe For Everyone - Buratai

According to Ologbondiyan, Zamfara is blessed with abundant human and natural resources that the in-coming administration can harness for the overall wellbeing of the people. He, therefore, urged the people of the state to resist all forces of division and unite behind their new leaders to move the state forward.

Meanwhile See some reactions as regarding the tweet above:

You are already FALL BELOW THE LINE MR ATIKU.

@atiku will be sworn-in as President of the Federal Republic of Nigeria in October.

Congratulations to @OfficialPDPNig and the people of Zamfara State!

When there is strong faith, hope will be alive but I doubt how long Atiku will wait to bring make this hope alive.