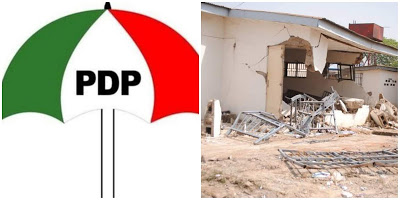 Kwara state government had early hours of Thursday demolish the family house of the former Senate President, Bukola Saraki. The action which was condemned by many have occupy the new year as the internet is busy with lots of comments coming in.

Reacting to the action by Kwara state Government, the Peoples Democratic Party (PDP) has condemned the demolition of a property belonging to the family of the former Senate President.

PDP described the invasion and demolition as wicked, cowardly and a direct recipe for a huge crisis in the state.

The party in a statement by its National Publicity Secretary, Kola Ologbondiyan, said that the action of the state government is borne out of hatred and political intolerance.

According to the statement;

The party holds that it is clear that the action of the state government is borne out of hatred and political intolerance, in furtherance of the larger plot by the APC and its administration to intimidate, suppress, hound, crush and silence opposition and dissenting voices in our country, in the bid to foist a siege mentality on the citizenry.

The PDP dismisses the reasons being spewed by the APC administration for this New Year dastardly act as baseless, false and incongruous, as they fail to add up, to justify the ferocious invasion, harassment of citizens and demolition of the said property.

The early morning demolition exercise shows that the state government carried out an unwholesome operation.

The timing of the invasion and demolition, in the wee hours and under the cover of darkness, is a direct indication that the state government was carrying out an unwholesome and condemnable operation during which defenseless women were fired with gunshots.

The PDP invites Nigerians to note that demolition of property, genuinely belonging to opposition leaders and other Nigerians perceived to be opposed to APC’s oppressive administration, has become a policy of the APC and its government in their bid to subjugate Nigerians and exclusively appropriate our common patrimony for their selfish purposes.

Our party, therefore, stands with Senator Saraki and cautions the Kwara state government to henceforth steer clear of the property.