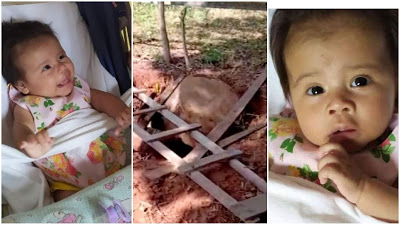 23-year-old Tiago Lacerda, and Raquel Dias, who is about 25-year-old were charged with murder after allegedly confessing to dismembering their child before throwing the severed parts into a well.

The parents of the six-month-old baby
appeared in court on Tuesday in Tabaporã, central west Brazil, after going on the run.

The couple were caught some 700 miles away from their home after hiding out in another state.

Lacreda, who was not the biological father, claimed the little girl died by accident after being given some medicine for a cold, police reports state.

He claims to have hidden the body because he didn’t immediately know what to do.

According to the mother, she told detectives that she was not at the property when her daughter died.

When she arrived at the home the child had already been cut-up and thrown into the well, located several miles away.

The police reveal that, the step-dad contradicted her version of events, claiming that they both decided to carve up and conceal the little girl’s body.

According to the police, the parents were already under investigation for child abuse with the first assault allegedly occurring when the baby was 28-days-old.

Facebook
Twitter
Pinterest
WhatsApp
Previous article‘I Was Wrong’ – Nnamdi Kanu Apologises To Abia Police Commissioner, Okon
Next articleNigerian Man Killed His Girlfriend By Running Over Her With His Car

54-year-old Woman Gives Birth To Triplets In First Pregnancy
ALSO READ:  Man Narrates How His Wife Saved Their Daughter By Diving Into Well After The Child Fell In
A 54-Nigerian woman, Funmi Ajagbe has given birth to a...
Read more
General News