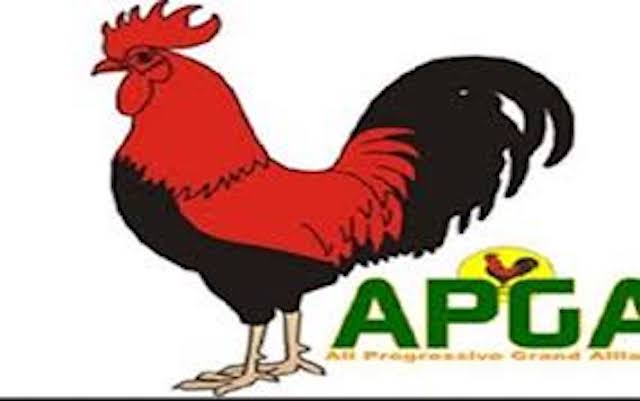 The All Progressives Grand Alliance (APGA) on Friday re-elected Dr. Ike Oye and Mr Labaran Maku, as its National Chairman and Secretary, respectively, for a second tenure of four years.

It was reported that all the national officials were re-elected through a unanimous voice vote from the party delegates drawn from the six geo-political zones of the country.

In an acceptance speech, Oye thanked the delegates for re-electing them for a second tenure, saying that the gesture demonstrated the confidence they reposed in them.
“We will not abuse the confidence,” Oye said.

He said that his leadership was aware of the enormous challenges facing the party and promised that they would steer the ship of APGA to safety.

Oye further said that APGA had risen to,become the third largest party in Nigeria and that the task before the party leadership at all levels was how to win elections.

He said: “Our main goal as leaders of the party is to win elections and we have no choice than to take the party to the centre stage of national politics.


“Another immediate challenge before APGA is the need to build a national secretariat in Abuja because we are still operating from a rented office.”

Oye assured the party faithful that the N1.3 billion realised through the sale of forms during the general elections was intact in the bank.

He appealed to all the aggrieved members, who defected to other parties to return, saying that they still had a lot to enjoy in APGA.

Also, Gov. Willie Obiano of Anambra hailed the peaceful conduct of the party’s congresses from ward to national level.

Obiano, who doubles as the Chairman, Board of Trustees of the party, urged the re-elected officials to work harmoniously and in line with the party’s guiding principle of unity and oneness.

Highlights of the event included the swearing-in of a 32-member board of trustees of the party.

Membership of the board included Emeka Ojukwu, the first son of the founder of APGA, late Dim Chukwuemeka Ojukwu, his wife, Bianca, Prof. Charles Soludo, former Governor of Central Bank of Nigeria, Sen. Ifeanyi Ararume and Chief John Gbor, the party’s presidential candidate, among others