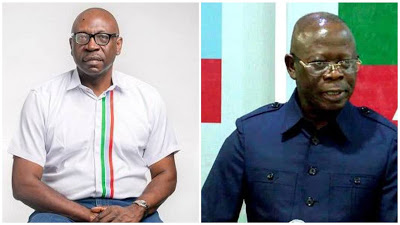 An attack has been launched on the governorship candidate of the All Progressives Congress, APC, Pastor Osagie Ize-Iyamu, by the Peoples Democratic Party, PDP, over his recent comment on godfatherism.

In a statement through it’s National Publicity Secretary, Kola Ologbondiyan, the PDP said Ize-Iyamu lacks the quality to become Edo State governor, even with the help of his “godfather,” Adams Oshiomhole, who is the suspended National Chairman of APC.

Moreover, the people of Edo state had been openly told by Ize-Iyamu’s godfather, Adams Oshiomhole, that he is not fit to occupy the office of the governor of Edo state for reasons he had also put in public space.

According to Oshiomhole, Ize-Iyamu is only good for political “night meetings” and not to occupy the highest office in the state, where he
will fail.

Edo people can also recall how Oshiomhole swore before God and man that people with the character traits of Ize-Iyamu should not be allowed anywhere near a public office like that of a governor.

It is therefore nauseating that having degraded Ize-Iyamu across Edo state and beyond, the APC, in their arrogance and disrespect for the leaders and the people Edo, want to foist such an individual on the
state through a shambolic primary election.

Given the crisis that has destroyed the APC to its tatters, it is difficult to assert that Ize-Iyamu will be their eventual candidate