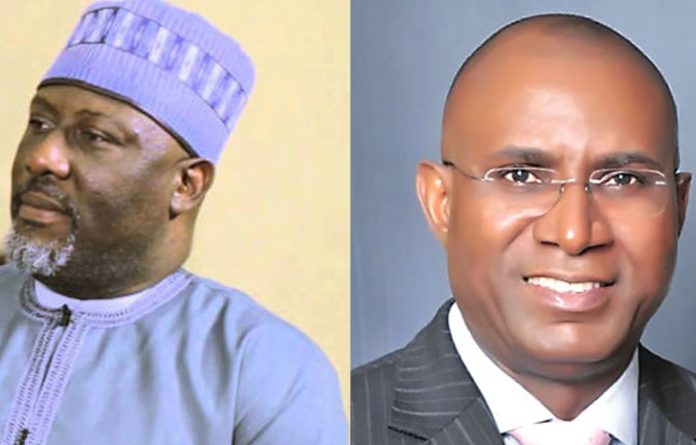 Dino Melaye, senator representing Kogi West Senatorial District may have triggered another round of controversy with the newly sworn-in Deputy Senate President after he trolled Senate Ovie Omo-Agege over the mace incident that happened in the National Assembly premises last year.

Sharing a picture on his Instagram page of new President of the Senate Ahmed Lawan and Omo-Agege along with one of the orderlies holding the mace with both hands, Melaye added that Lawan was telling the orderly: “O BOY HOLD THAT MACE WITH TWO HANDS OOO. I NO TRUST THIS OMO-AGEGE. NA TIFF.”

With a picture of the orderly smiling and replying him: “HAHA…OGA NO WORRY I DON HOLD AM WELL”.
Melaye also added in the comments section: “When you work with a Mace thief.”

While many who commented on the post bluntly told Senator Melaye he was wrong, a few supported him.
There has been no reply from the DSP Omo-Agege over the incident as at filing in this report.

View this post on Instagram
When you work with a Mace thief
A post shared by Senator Dino Melaye (SDM) (@dinomelaye) on Jun 15, 2019 at 2:51am PDT


It would be recalled that in April last year, thugs who were alleged to be acting under the instruction of the Senator representing Delta Central Senatorial District, forced their into, seized and escaped with the mace of the Senate, from the upper chambers of the National Assembly.

Though the mace was late retrieved from the thugs after a few hours and Omo-Agege accused of aiding the thugs to steal the mace, the allegations remain unproven till date.