Obaseki Will Be Re-elected As Governor — APC Chairman 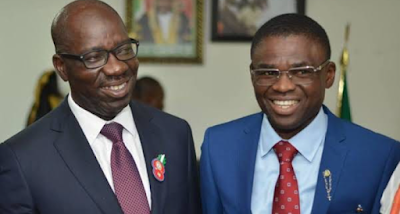 The Edo state chairman of the All Progressives Congress, APC, Anselm Ojezua, has said that governor Godwin Obaseki, will still be reelected as governor of the state.

He said this while reacting to the governor’s chances of reelection following his decision not to appeal his disqualification by the screening committee of the party.

By tomorrow, we will meet and be in a position to make a proper statement on what the future holds for the party in Edo State.

He called for calm among party members and supporters following what he described as unjust disqualification of governor Obaseki from contesting the Governorship primary of the party.

According to him, the governor has performed credibly well and will be reelected for a second term, adding that the result didn’t come as a surprise as the governor had alluded to the fact that he will not get justice from the screening exercise.