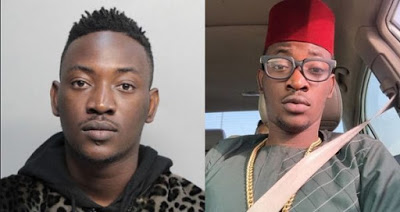 A court of magistrates Igbosere in Lagos granted the popular Nigerian musician Johnson Hunga Oyindamola, also known as Dammy Krane, a bond for an amount of N50,000 with a guarantee in the same amount.

The magistrate, A. F. O Botoku, postponed the matter until 11 October for the start of the trial.

Previously the musician had pleaded not guilty to the three charges that the police preferred against him.

His lawyer, Adebayo Oniyelu, while asking for bail, said that the defendant is “a known musician who has not been convicted of any crime and this is the first time he will be accused of one”.

He also stated that the defendant would not interfere with the charge if he was given bail, and said that Johnson had been in custody since Friday.

“Your Honour, while coming to court today, I already heard it on the radio that a musician is to be arraigned today, it is even an international issue. ”


Interjecting, Mr Oniyelu informed the court that the case was one of breach of contract.

Mr Enang, however, told the court that the case is not as presented by the defendant.

“That is not so, the defendant went to a radio station and started threatening and defaming the complainant. In fact, we are going to amend this charge. This is an international threat. ”
When Mrs Botoku asked if he was aware of any debt issue or came across such during an investigation, Mr Enang replied in the negative.

ALSO READ:  Forgive Me For Using Bible As Ashtray While Smoking - Etinosa Idemudia

“I am not aware of any debt, no issue of debt came up during the course of investigation. ”

In response to the claim of debt owing, a representative of the complainant, Merrybet Gold Limited, who was present in court, Otemu Anaonye, said the company was not owing to the musician any money and he was only making false claims to the debt owing.

The counsel to the company who is also holding a watching brief in court on behalf of Merrybet, N. Anachebe, told the court they had written to Mr Johnson to withdraw his statements and he refused.

“We have written to him to retract the statements he made on his Instagram page to the effect of us owing him and he didn’t.”

“Your Honour, I know defamation can be both criminal and civil. ”

Mr Johnson is accused of making statements capable of breaching public peace and threatening the lives of the staff of Merrybet Gold Limited on July 25, an offence that is said to be contrary to sections 301, 412 and 168 of the Criminal Law of Lagos State of Nigeria, 2015.

He is said to have released audio and video recordings containing contents capable of disrupting public peace. If found guilty, the prosecution said he is liable to three years in prison.
latestalert.ng