Home News General News Nigerian Man Recounts How A Prostitute Changed His Life And That Of...
NewsGeneral News

One might have the power to judge or condemn people they think are bad but should not think of themselves as above or better than others. With this conviction, help and support might come your way where you least expected.

Surprised, yet a grateful Nigerian man narrated how a prostitute he met with his friends during their undergraduate days, changed their lives.

According to the AllahKaduna Nzeogwu, their relationship with the lady started off with a heated exchange after his friend who eventually married her brought her home.

Initially the lady was upset that she was brought to a house that had other people sleeping in it, Nzeogwu recounts.

But in a meantime, after his friend got into a romantic relationship with the lady after their first encounter, she got them a job at the Niger Delta Development Commission (NDDC) and other contract jobs which changed their lives for the better.

Weeks ago I attended a child dedication ceremony in Port Harcourt, among other notable people in Port Harcourt who were in attendance, was a serving Commissioner in Rivers State. My friend’s child was the celebrant and he the host.

The mistake most of us made in life is lack of the wisdom to distinguish a casual friend from a relationship, hence, we treat prospective partner like a casual girlfriend, and treat a girlfriend like a wife.

Years ago, me, this my friend and one other of our friend used to be roommates in a One room self contain in Port Harcourt. Though things was rough for us, we were almost oblivious of the realities of our poor circumstances, hence our primary concern was money for beer, sex, food, clothings and contributions for rent.

We were together when he met his wife. We met her in a club, normally any of us taking a woman for the night goes home first, after action he sends a message then the others come back. The only consideration is that we leave the bed for them and sleep on the floor. The only time we leave the room to sleep in a neighbour’s room is when the girl is not a club girl.

Usually, after the first person that brought a call girl home is done, the other two try to negotiate for a side show which is often half price of the Night, but that day she was so upset that my friend didn’t tell her he had other people sleeping in his room, she refused to let me or the other guy to do even with our money.

In the morning she kept insulting my friend, and reported him to us for telling her he likes her and would want to make her a serious date. She ridiculed him and began calling him “Osho Free”. She said my friend thought she’s naive, that he is looking to be having sex with her without paying by telling her about relationship despite knowing that she is a hustler.

The next weekend, he didn’t come back home, next morning he told us he went to the call girl’s apartment and he had to pay higher because she initially refused to see him because of him having roommates, then they agreed they do their transaction at her apartment but on a higher price.

That’s how my man began dating this lady, then we honestly believed he was under Edo spell and spending all his money. We kept advising him that it was only a man who just moved to the city from the village that falls in love with a commercial sex worker.

The lady began coming over on weekends to cook for us, we soon became friends, though we never disrespected her to her face, we continued to discourage our friend because she kept doing her normal business and my friend’s defense was that she told him she was never going to sleep with his friends, neighbours or colleagues even for a million dollars.

In those days we didn’t really have big dreams, aside securing a job that could pay up to N70K per month. We were yet to realise that we have graduated, we kind of still lived lives as students. We just graduated from the university. Our highest aspirations was a Master’s Degree, ability to afford Toyota Camry and move to a bigger apartment.

Until the day, the girl told us about “Water Hyacinth” contracts in NDDC, then it was a new agency. She has an inside contact and would present my friend as her brother. My friend is from a non-NDDC state while she is Edo, but since I am from Abia State I was to partner with him while the girl arranged Local Government Certificate of origin from Edo State for him. My job was to use my Legal professional skills to draft our proposal and also defend it at the NDDC.

Few months later we got the contract, for the first time in my life I realised how poor I have been.

Well, from that day i stopped calling the girl “dancer” and began addressing her by her name. I and the other guy stopped being condescending to her.

She later arranged for another Interior Decoration contract, I know Aba very well so I was the person that sourced all the materials and arranged the skilled labourers from Aba.

We moved to a 2 Bedroom Flat and bought cars, my friend and his girlfriend took one room while me and the other guy took one. In less than 6 months we went for her Traditional engagement. From that day, as bro code I started addressing her as “Madam ” being my friend’s wife.

They later moved to another apartment. My friend was the first amongst most of our contemporaries to buy a land in Port Harcourt and began building.

Well, a club girl changed our life for the better. Sometimes, I sit back and wonder where I would be and what I would be doing today if we didn’t meet that girl or we succeeded in persuading our friend to leave the girl. I would probably be in my Learned Senior’s chamber hustling for Appearance Fee so that I can go to court to be screaming “I put it to you”.

I have not seen my friend for some years but he insisted I come for the occasion, he wanted us to discuss. He told me they were relocating to Australia. That the wife got a contact and they paid huge amount of money. Him and his family are moving, but he will come back from to time because of his several engagements in Port Harcourt. 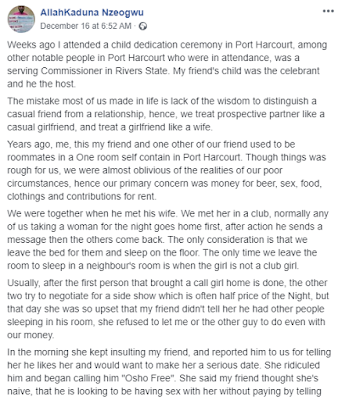