My Husband Was Killed Like A Goat, Wife of Murdered Ex-NNPC Staff Bemoans 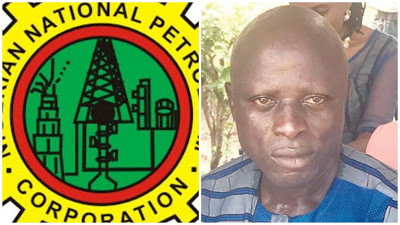 A 65-year-old ex-staff of the Nigerian National Petroleum Corporation (NNPC), Ibrahim Ajayi Allah, was reportedly hacked to death in his Oke-Oyi farm site of Ilorin East local area of the state by his assistant.

The deceased who was killed on December 13 by one of the workers at his farm in Oke-Oyi, outskirts of Ilorin, retired from the finance department of the NNPC. The police have however arrested one person in connection with the crime.

In the cause of the investigation, the Kwara state police command have assured that  investigations are on, to reveal reasons behind the murder of the former Nigerian National Petroleum Corporation (NNPC) staff.

According to Ajayi Okasanmi, the police spokesman of the command, police had not concluded investigations on the matter, adding that the command was yet to make another arrest.

My husband’s death was cruel and wicked. The attacker has made his three children fatherless and I’m now a widow. The death has also brought untold misery to many homes.

There are those on his scholarships, many are graduates, there are many aged that he was taking care of. He took good care of me as well as his children’s education and well-being. In fact, it’s great vacuum. Many people have expressed sorrow over his demise.

He took care of his workers. This man that killed him was his assistant on the farm. He entrusted him so much.

He calls me every morning around 5:00am. When I didn’t see his call on that day, I was worried, thinking he didn’t probably charge his phone.

When it was around 6:30 am, I called him, none of the lines was going through. At about 7:00am, I succeeded with one of his lines and the person who picked asked what I was to the owner of the line. I said I’m his wife.

The person said he’s a police officer and that he’s speaking from police station. He said my husband had an accident. I called him back and that’s when he said I should come to police station at Oke Oyi in Ilorin. I was already shaking.

I decided to call his brother in Ilorin and he said he’s yet to know what’s going on because he was just called too. He told me my husband’s car was still parked where it was but he had not seen his brother.

However, people had already been calling me to commiserate while in the bus on my way from Abuja to Ilorin. I told myself that my husband is not dead, why the condolences.

By the time I got to Ilorin, it was about 8:00pm. I called the police officer that I was already in Ilorin but he said I should come the next day since it is already late.

Around 9:00 pm, my husband’s brother called me to say that my husband’s phone was found in his Oke Oyi farm where he was reportedly matcheted. I was just wailing and crying upon the reality that dawned on me.

When we got to the police station the following morning, I was showed picture of my husband. He was killed like when one kills a goat. I was showed the assailant too.

I saw him in handcuffs on his legs and arms. I asked him why he killed my husband and he said he wouldn’t have intentionally killed him.

He said he was under a spell (eedi). He said my husband was nice to him, took care of him and promised to buy a car for him but didn’t know how it happened.

He told me physically that he was the one that committed the offence but didn’t know what came over him. I was shaking and couldn’t bear to hear anything from him again before he was taken back inside. They even thought I wanted to fight him because I was so dejected.

My husband’s corpse had been taken to mortuary. We asked for the release but police said they wanted to carry out autopsy. So, he was eventually released to us on Monday evening for burial being a Muslim. The police told us they would have to investigate the matter.

I appeal to the police authority in the state to help me carry out all investigations needed on death of my husband and bring all culprits to book so that justice is prevailed in order to deter others from doing such in future. This is a case of murder. This man must be prosecuted because he deliberately committed the offence.