Home Health Meet Husband & Wife Behind COVID-19 Vaccine That Could Save The World...
Health 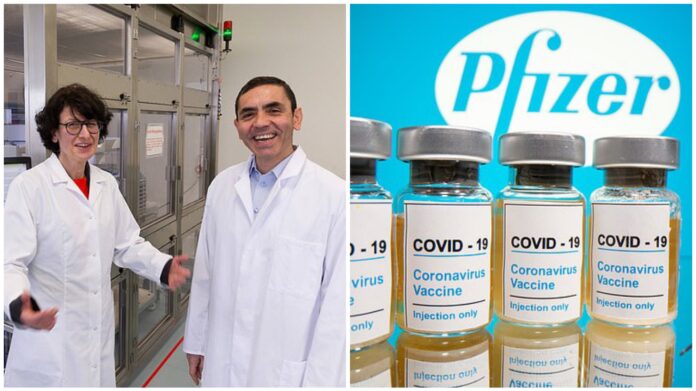 Married couple, a 55-year-old Ugur Sahin and a 53-year-old Oezlem Tuereci, who bonded over their love of medical research are behind the Covid-19 vaccine that could change the world.

Mr Sahin came from humble roots to build two billion-dollar companies but still rides to work on his mountain bike.

The physician turned chief executive of a German biotech firm and his wife Oezlem Tuereci, a fellow board member of BioNTech, are being hailed as the ‘dream team’ behind the world’s hopes for a COVID-19 vaccine.

CBN To Support The Development Of Locally Made Vaccine With N100bn

COVID-19 Will Disappear Without Vaccine – Trump

Breakthrough in the global race to find a COVID-19 vaccine took a leap forward today when pharma companies Pfizer and BioNTech claimed their jab is 90 per cent effective.

UK prime minister, Boris Johnson promised the UK will be at the ‘front of the pack’ for the new coronavirus vaccine tonight after the massive breakthrough.

Born in Turkey, Mr Sahin was raised in Germany, where his parents worked in a Ford factory. Trained as a doctor, Mr Sahin became a professor and researcher focused on immunotherapy.

He worked at teaching hospitals in Cologne and the south western city of Homburg, where he met immunologist Miss Tuereci during his early academic career. Medical research and oncology became a shared passion.

Miss Tuereci, the daughter of a Turkish physician who had migrated to Germany, once said in an interview that even on the day of their wedding, both made time for lab work.

Together they honed in on the immune system as a potential ally in the fight against cancer and tried to address the unique genetic makeup of each tumour.

Life as entrepreneurs started in 2001 when they set up Ganymed Pharmaceuticals to develop cancer-fighting antibodies, but Mr Sahin – by then a professor at Mainz university – never gave up academic research and teaching. Ganynmed was sold to Japan’s Astellas in 2016 for $1.4 (£1.06) billion.

Mr Sahin and Miss Tuereci co-founded BioNTech in 2008, with the aim of pursuing a much broader range of cancer immunotherapy tools. The Bill & Melinda Gates Foundation has invested $55 (£41.8) million in the company, which also works on HIV and tuberculosis programmes.

Colleagues describe Mr Sahin as a calm and measured man who avoids checking the company’s share price and is more interested in reading scientific journals.

He and his wife now figure among the 100 richest Germans, according to German newspaper Welt am Sonntag.

But Matthias Kromayer, a board member of venture capital firm MIG AG, whose funds have backed BioNTech, said: ‘Despite his achievements, he never changed from being incredibly humble and personable.’

Nigeria on Wednesday, November 25 record 198 new cases of COVID-19, 182 discharged and 0 deaths. The NCDC while announcing this via it's twitter handle...
Read more
Health