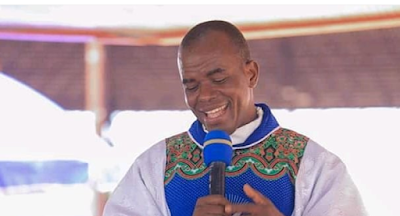 One of the prophesies released by the spiritual Director of Adoration Ministry, Rev. Fr Ejike Mbaka for the year 2020 has come to pass already.

The clergy man prophesied that the 2019 All Progressive Congress (APC) governorship candidate for Imo State, Senator Hope Uzodinma, would take over the governance of Imo State from the Incumbent governor, Chief Emeka Ihedioha.

Mbaka said in his prophesy;

In Imo State, there is hope. Hope, hope, hope … hope in Imo State!

Imo people have suffered but God is raising a new hope that would be an agent of salvation for them.

He’s coming with a new flag to restore the dignity of that noble land. A new leadership that will break barriers and there would be joy in the land of Imo.

Lift your candles as I bless Hope Uzodinma; and I empower him to, spiritually take over. How, I do not know.

Please, if you heard that there would be a new government in Imo and you don’t like the message; if I say Hope, you can say hopeless but do not fight me.

However the prophesy of the reverend has come to pass as the supreme court sack the Imo state governor, Emeka Ihedioha on Tuesday, January 14.

The court however ordered that Hope Uzodinma of the All Progressives Congress (APC) be sworn in immediately.

The prophesy had earlier received a lot of criticism from christian association of Nigeria, CAN, as well as political parties.

The Imo State chapter CAN alleged that, the cleric’s prophesy was without substance, wondering why a matter before the Supreme Court, the highest court in the land, would be so tossed around.

Bishop Lucius Ugorji of Umuahia Catholic Diocese, who is also Apostolic Administrator of Ahiara Diocese, also said the Catholic Church, which Fr.Mbaka belongs to as a Priest, is not into fortune telling and as such, does not give authority to any priest to make predictions on who wins a court case or not.