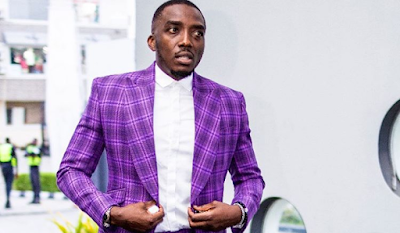 According to wide speculations a ‘Marlian’ is a (true) follower of popular Nigerian musician Naira Marley. Also known as his ‘no-belt-gang’, this group of people are very devout followers of Naira Marley and are known to usually be skilled in illicit activities such as 419 and yahoo.

And Titans are supporters of Big Brother Naija Star, Symply Tacha who apparently, can go to any length for her.

Reacting to rising marlians and Titans gang, popular humour merchant, Bovi has stated that if he is elected president of Nigeria, his first task would be to declare fans of Tacha (controversial ex-Big Brother Nigeria housemate)known as Titans as well as fans of fast-rising singer, Nairamarley, known as Marlians as terrorist.

The comedian made this known during a question and answer segment on his social media account when a fan asked him what his first task would be if he sleeps and wakes up as Nigeria’s president.

If you sleep this night and wake up as president of ur country, what will be your first action”.

Replying the question, Bovi said he would first of all, declare Titans and Marlians as Terrorist Organizations. 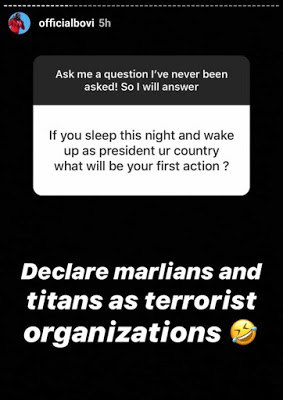